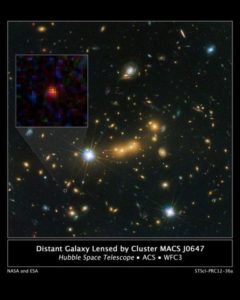 If there was a competition in the discovery of new galaxies, a group of researchers from the U.S. space agency NASA would now probably set a new record. A look at a distant object so far, astronomers have never caught on like the now-found galaxy MACS0647 JD . It is estimated that 13.3 billion years old. Their light has taken so long to reach Earth. 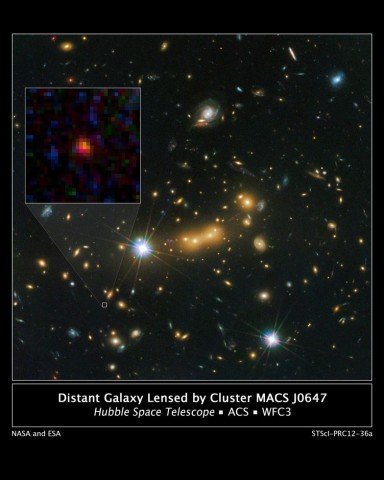 The discovery seems to visually but rather less exciting: a small blip on photographs, surrounded by many other, much stronger shining star constellations. But the faint glow of the galaxy gives us information on a time shortly after the universe was created.Scientists from NASA estimate that the new galaxy already 420 million years after the Big Bang was introduced.

It is not easy, so distant objects make to our human eye. To the international used NASA research group called CLASH not only the combined forces of the Hubble and Spitzer space telescopes, but used a special trick: The natural zoom lens of the universe allow us to see even distant galaxies.

This technique is known as gravitational lensing, and is based on the forces of gravitational fields in the universe. Basis for the optical phenomenon is the relativity theory, according to which light beams are bent by the force of gravity. When two stars seen from Earth are in a perfect line, the front of the rear amplify the light like a lens.

“Such clusters enable formations of stars, which can not artificially produced telescope” said Marc Postman, head of CLASH (Cluster Lensing And Supernova survey with Hubble). In the case of the galaxy MACS0647 JD-it was possible with the help of natural gravitational lens to capture three images of the galaxy with the Hubble Space Telescope. Without lens in space, the galaxy would have been discovered probably never – or only with less certainty and much worse resolution. The magnification of the natural lens, the galaxy could appear up to eight times brighter than it would have been by the Hubble telescope.

Red light is evidence of the distance

From the time course of the light amplification can be drawn on the foreground object move. The age of the distant galaxy can turn through special filters and a detailed analysis of the spectra of light emanating from the galaxy, to be estimated. MACS0647-JD was found only in the most red filters.

“This can mean either that the galaxy is very red, and therefore emits only red light. But it could just be that the object is very far away, and its light, therefore, in the course of the path to Earth, in the direction of this red wavelengths moves, “said Dan Coe, who is leading the study of the new galaxy and added that it was” probably a mixture of both. ” Much talking but for the statement that the galaxy is very far away, for all the alternative interpretations for the red color would Coe and his colleagues ruled out in recent months, several analyses.

The final results and some additional information on the newly discovered galaxy and their properties will be in the December issue of the magazine The Astrophysical Journal.