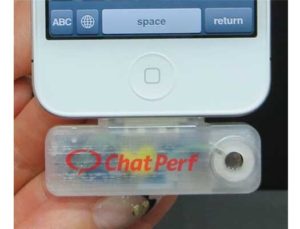 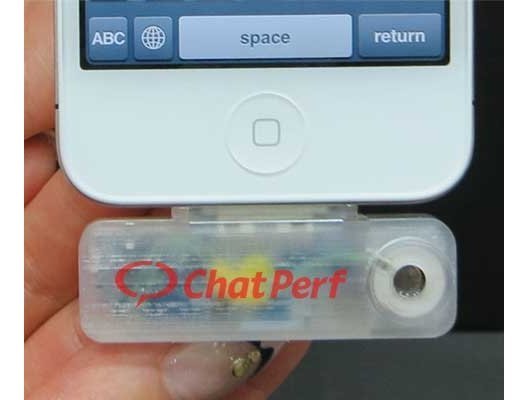 According to the news site RocketNews24, the Japanese company Chaku Perfume has “developed a new communication service in the way of an iPhone application and device called “Chat Perf,” which can send smells across cyber space. Amazing!”

Yes! We think this sounds amazing, too! Wouldn’t it be great to be able to share the scent of a bakery you just walked past with a friend hundreds of miles away? Or capture the smell of autumn? Or be like, “What is that smell? I’ll share it with my friends; maybe they can tell me.”

Except, Chat Perf is not quite going to make that possible. Based on the story’s description, it seems that the new app is only capable of releasing, upon a remotely issued command, whatever odor has been stored in the smell tank attached to a person’s phone. So, you could potentially purchase a bakery-scented smell tank, give it to a friend, travel hundreds of miles away, instruct your friend to plug their bakery smell tank in, and then “send” the smell to them through the Chat Perf app. Which is, frankly, probably not worth the effort.

Chaku Perfume may have anticipated that problem, because they provided RocketNews24 with a few ideas to get developers started:

You could send a smell that matches a favorite scene from one of your games while your playing with a friend.
A tourist attraction could give gift-smell tanks to guests of aromatic yaku cedar, sure to get them to come again.
You could receive the sweat smell of your favorite idol during a concert, fans caught up in the moment would go wild! [emphasis added]
You could include a pleasant scent with a news letter.

Does anyone really want to smell the sweat of anyone while watching a concert? Chaku Perfume thinks someone might. Someone outside of Japan, according to the article: “Japan is a relatively odor-free culture…With this in mind, the Chat Perf might prove to be compatible with foreign markets.”

Despite our overall disappointment with the new app, it did get us thinking about what it would take to bring real, true, bona fide smellepresence to fruition:

First, researchers would have to develop a true electronic nose–one capable of analysing odors in the same way that the human brain does. (Despite over thirty years of research, that achievement is still a long way off.) Assuming we’re talking about a cell phone app, the electronic nose would have to be at least as small as our real human ones.

Next, the code for the odor would be transmitted from the user’s electronic nose to the scent recipient’s cell phone. This would be the easy part.

Finally, the scent recipient would need to be carrying a device containing–in an organized fashion–the 10,000 or so odor molecules that humans are capable of smelling. We’re not even going to wager a guess as to the size of that contraption, but you can bet it would be clunkier than the clunkiest iphone device anyone’s made yet.

In short, we’re a long way off, and Chat Perf is a tiny first step.