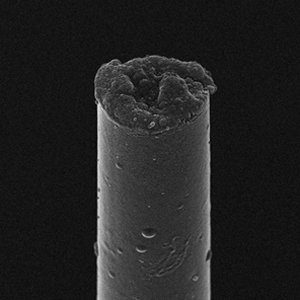 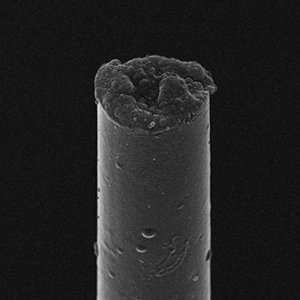 Researchers at the University of Michigan, USA developed a type of flexible electrode made of carbon and a thin layer of dielectric material. Small, foldable electrode meets the specifications for operation in the body: it is flexible and allowing bend under pressure and  Due to the resistance of the carbon it may last for decades. With all these features, the small electrode of 7 microns can become the basis of a future brain connected by nano-wires.

The creation of computer interfaces x mind depends on the discovery of American scientists. The human brain occupies a very tiny electrodes to include common.Furthermore, due to the behavior of the body, the body can swell or shrink in size. In such situations, a common electrode inevitably cause damage to nerve tissue.

On impact, the brain is compressed in one direction skull. In migraines caused by the consumption of too much drink, the brain literally shrinks by fluid loss. In both cases, a common electrode could penetrate the brain tissue with ease, causing serious damage.Furthermore, this type of component is manufactured with toxic materials to the functioning of the body which is not the case of the carbon electrode American scientists.

The idea of creating interfaces that connect the brain to computers is interesting for many scientific fields. At first, neurologists have a new channel to study brain function and to find new approaches to the treatment of diseases currently considered incurable.

In the future, an ordinary person can use a logical bridge between your brain and your personal computer, for example, by applications that respond to today’s command voice sound like a thing of the past. It would, in theory, possible to control the operation of the cell with just the power of thought.