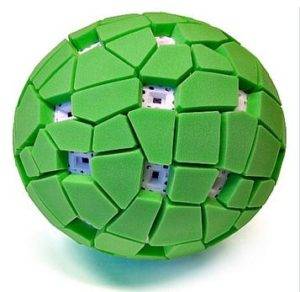 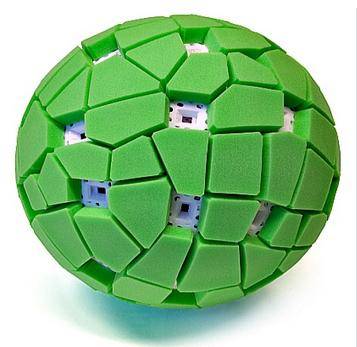 A group of graduates from the Technical University of Berlin created a spherical device that gets thrown into the air and take a complete Panoramic picture thanks to its 36 built-in mobile phone cameras. Video demonstration.

It is not yet commercialized prototype Jonas Pfeil and colleagues from the university (Kristian Hildebrand, Carsten Gremzow, Bernd Bickel, Marc Alexa), who invented the device for his graduation thesis at the Computer Graphics Group at the Technical University of Berlin.

Pfeil, a computer engineer who has already graduated and obtained his degree as Master of Science (M. Sc.), And the group of young entrepreneurs and are seeking investors to start mass production of his invention.

The ingenious Throwable Panoramic Camera Ball is a sphere with attached polyurethane blocks, resembling a soccer ball or volleyball, which, after being thrown into the air takes a panoramic picture of the place.

At its circumference has 36 fixed-focus cameras CMOS Microelectronics quarter of an inch, such as cell phones, with a resolution of 2 megapixels each and also an accelerometer, which lets you know when the ball reaches its maximum height and from this position makes the image capture at 360 degrees. Also carries two Atmel microcontrollers to synchronize and control the fire.

The ball is tossed into the air and catch the 36 panoramic shots in the highest point of the flight, when barely moving, and all at the same time.So you can  capture scenes in custody, although there are many moving objects or people, without producing the typical effect of “ghost” or blurring, which occurs 360 º photos to be composed with conventional cameras. 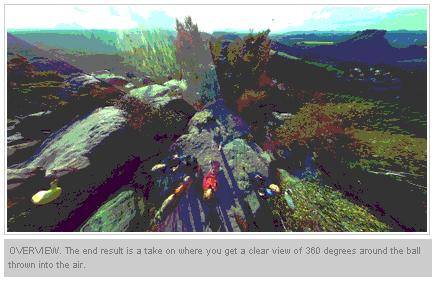 The attractiveness of the Throwable Panoramic Camera Ball lies in the images are as much as seen the human environment. Capturing these images requires a tripod, multiple camera positions and precision to paste a picture with the other, or digital SLR cameras that do not have the “picture”. But Pfeil invention eliminates all of this, because all the component images are captured simultaneously.

Then, like any digital camera, you can download the files from each camera through a USB interface and automatically plays the final image is composed of about 72 megapixel display in the program. This allows users to interactively explore a complete representation of the capture environment, similar to the views of Google Maps street and can be zoom or move to a particular region.

Should I Get a Apple iPhone 4s Or Samsung Galaxy S2 ?