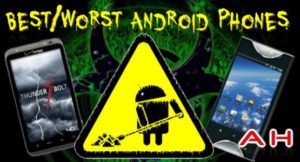 The device of T-Mobile is considered the father of the Android phone. You can see the appearance of the basic keys such as Home, Call, Back and End the call at the bottom of the phone. However, all are made of hard keys instead of the touch keys on the current Android phones.

Moreover, this first phone internal memory is only 192 MB, which means that users will not be able to update the version of the operating system and install additional applications. T-Mobile G1’s screen is large but not a touch screen and the use depends entirely on the QWERTY keyboard are combined below. Meanwhile, most of the actions on the Android is mostly done on the large touch screen, create a sense of simple and more user friendly.

Motorola has been a storm with the clamshell RAZR phones in 2000 and perhaps so that Sharp has decided to use this design on the Aquos Hybrid was launched in 2011. Can say this is the first clamshell handset built Android version 2.3 was introduced to consumers.

The most impressive thing for this device that is the “crisis” of up to 16 megapixel of it.However, once again, the Aquos Hybrid has failed because of inappropriate design of the operating system that it is using. Users feel uncomfortable to manipulate real keyboard and a screen too small at the time of 2011.

Sony made the mistake of deciding to integrate QWERTY keyboard next to the touch screen of this Android handset. The phone version previously common Mini seems to no longer be appropriate at the time the user is always preferred mobile devices with large touch screen at the present time.

Besides using hard keys irritating, touch screen of Xperia Mini Pro also proved too small to make Android users feel satisfied. Besides, the compact size of a mobile phone is no longer a problem too big for the client at this time. When you look at the success of the Samsung Galaxy S3 and Galaxy Note we will understand why the Xperia Mini Pro is not as successful as expected.

Like the above three phones, the Kyocera Echo continue to fail in the market because of differences in design that the manufacturer gives it does not suit the tastes of consumers.With the desire to maintain its compact design compared to its competitors and still have a large touch screen for Android, the screen the Echo was divided into two somewhat different in design than horizontal ever ever.

Unfortunately, the second screen below proved to be really useful and annoying in the process of using the main screen at the top. In addition, the features and specifications below average when using a single-core processor chip, a 5 mega pixel camera, nothing special, it’s hard to for Kyocera Echo gain sympathy from the consumer users.

The previous success of the Nokia N-Gage suggested for the Sony idea of ??integrating the ability to play great games from PlayStation on a device running Android. Slide design makes Xperia Play becomes thick and heavier than other Android devices.

Even so, this handset disappointing for gamers on its gaming capabilities. Hard joystick sensitivity and poor game quality makes the Play hard to deserve its name. A perfect combination not shield your phone fast Sony can not find a foothold in the market and gradually lost the ball after a short time.