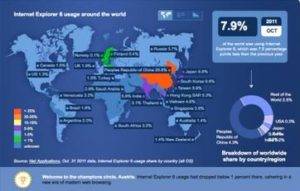 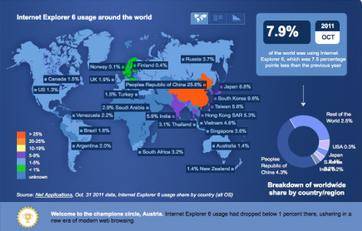 The fact that IE6 is dying, ok is a one story, but biggest news is that I think I even used to say that dies … The IE6 countdown is one of the many site, which have sprung up lately, dealing with the recording of the final “death” or even the negligible use of IE6.

Once upon a time,IE 6 was one of the most popular browsers circulated and it was the time when Microsoft had a whopping 95% market share of the browser. In those days, IE 6 was actually the benchmark by which other browsers are often compared and identified what are the shortcomings.

When first operated as honey and attracted users like bees, where they began to use it, and some, still, as odd as it sounds though. Even now we are entering the era of HTML 5, this browser still has its share of the market.

However, this does not stop many web-based companies to stop their support for IE 6 because they feel hinders their progress in providing a richer UI experience to their users. Despite the horrible security it offers, this browser still has followers.

The apparent belief in IE 6 is likely due to familiarize users with the program, and that in many companies and public services do not appear to be particularly concerned about what browser they use. The development and evolution of web pages are not cut, but one must think and developers should ensure that their sites be supported by IE6 .