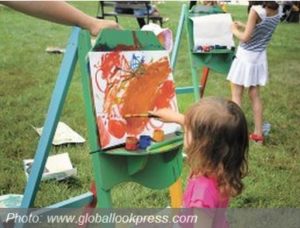 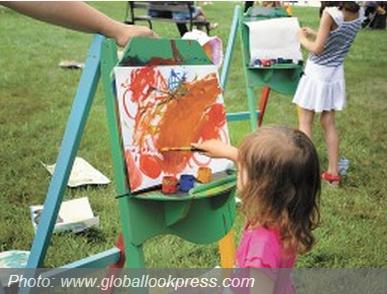 Studying children’s drawings, psychologists have identified distinct stages of development are to develop the skills of drawing.

They can be used to indirectly evaluate the level of mental development of children . With the help of pictures, you can identify and features of his character.

When drawing an object, the child unconsciously, and sometimes consciously, transfers his attitude. First of all he draws is that the most important and significant, but the secondary one will pay much less attention. When the image is particularly exciting topic and manifest signs of anxiety.

There are age-specific patterns in the image of man.

From 3 to 4 years . Subject pattern appears in children by about three years. In the subsequent development of the child changes the way images and increases the number of parts. Up to 4 years of age normally corresponds to the so-called cephalopods, which is a rounded head and extending from it or around bars – hands and feet (the amount of which may be different).

4 to 5 years . Child moves to draw primitive schema containing except the head, hands and feet image of a human body. Legs are located on the sides of the torso, arms usually start from the middle.

5 to 6 years . Subsequent development pattern is to go to the image thickness and toes. 5-year-old child draws limbs double lines.Hands still represented by mid-torso, minor parts (fingers, hair, eyebrows) are absent or rare. At the 6-year life the child masters the concepts of vertical and horizontal lines, if earlier, he often drew people in an inclined position, as if the incident, he now draws his standing vertically.

6 to 7 years . For six years the child often draws the human hand from the top of the trunk. The figure appears minor details. For 6 years of age is the norm detailed images, the child draws a person with the neck, fingers, feet, clothing appears.

In the period of primary school age, the normal development of drawing skills, the human figure is portrayed realistically. Pattern on which different parts of the body not “glued” to each other, as in the diagram, and smoothly into each other without sharp boundaries, called plastic.This is most evident in the transition from the neck to the shoulders, the shoulders to the arms and the torso to the legs.

7 to 8 years . Characterized by a combination of elements of plastic and diagramming with a predominance of the latter. While some parts of the body are connected to each other without sharp boundaries, while others like glued.
8 to 9 years. At this age, the ratio of plastic and schematic elements equalized. For example, the entire upper body displayed plastically, and the lower – on the contrary.

10 to 12 years . Around the age of 10 plastic elements begin to predominate over the schematic. Drawings of children to pre-adolescents in general impression of realism, but the child has still not the image of a certain details.

12 to 14 years . Adolescence is typically fully plastic image of a human figure.

From this trend may be significant individual variations. For example, if after 4 years, the child still draws cephalopods, it speaks of his slow development.

With 6 years of age are a sign of backwardness drawings of limbs painted dash. With 8 years of delay say purely schematic drawings without attempting, albeit unsuccessful, to convey the real form of the individual parts of the body.

Lag behind age norms may be caused by the fact that the family is not encouraged in drawing lessons. If promotion pronounced, should refer to the experts and take your child to the survey, which revealed the possibility of the development gap.

But the rapid development in expressive activity may be due to the acceleration in brain development, and the presence of artistic abilities.