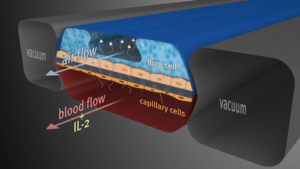 U.S. researchers have recreated a model of pulmonary edema on a polymer chip, using human cells. The authors called their model designed to test new drugs, “light on a chip.” The results of research scientists from the Institute of Bio engineering Wyss (Wyss Institute for Biologically Inspired Engineering) at Harvard University published in the journal Science Translational Medicine .

“Light on a chip” is a box made of a transparent, flexible polymer. Inside the box are located one above the other two channels are separated by a thin porous membrane, with one side lined with cells of the lungs, on the other – the cells of the capillary walls. Lower channel acts as a blood vessel – it runs on liquid imitating blood, the upper channel moving air stream. Respiratory cycle simulates the vacuum pump, which is after the whole system recreates the compression and expansion of the lungs during breathing.

Pulmonary edema blood plasma through the capillary wall enters the pneumatic part of the lung, and it is in the connective tissue (interstitium). Usually come in the interstitial fluid is eliminated lymphatic system, but edema through the capillaries leak too much plasma, which is the lymphatic system does not have time to remove. It is this process, scientists have recreated by the model.

Identical to the behavior of the built model and human lung has been proven experimentally. To do this, the researchers used an anti-cancer chemotherapy drug called interleukin-2, a side-effect of which is the occurrence of pulmonary edema.

Scientists injected the drug in a liquid flowing through imitating capillary channel, then “plasma” began to penetrate through the membrane to the airway of the system – just as it is in the development of pulmonary edema. However, the experiment was made two important discoveries. First, the researchers concluded that the immune system is not involved in the occurrence of edema in the treatment of interleukin-2. Secondly, the researchers found that the activation of respiration pulmonary edema increases the amount of fluid that penetrates the interstitium through the capillary walls, more than three times. They subsequently confirmed this finding in experimental animal models.

“This model of pulmonary edema can be used to identify new therapeutic agents in vitro”, – stressed MD, director of the Wyss Institute of Bio engineering and lead author Donald Ingber (Donald Ingber).

Ingber and his colleagues are striving to ensure that the model developed at the Institute of SoC – the heart, intestines, kidneys, and lungs – gradually could be a replacement for testing drugs on animals. “Leading pharmaceutical companies spend a lot of time and spend a lot of money on cell culture and to test new drugs on animals. But these methods are often unable to predict the effect of medicinal agents on the human body,” – said Ingber.