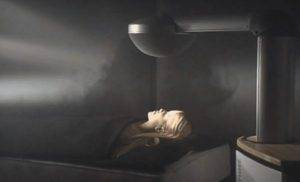 The Airsonett Protexo is a device somewhat futuristic look, designed to help people suffering from atopic asthma during sleep. Indeed the unit participated in a study to verify its capabilities, whose results were published in the medical journal of respiratory, Thorax.

The device is rather simple to remove allergens from the air particles, like traditional air cleaning devices, uses a technology called TLA (temperature controlled laminar airflow) that creates a flow of filtered air downwards, surrounding users with a filtered “air band” which ultimately offers greater protection against allergen particles. The Protexo seems to be a variant of the equipment the company Opragon, used to provide filtered air in operating rooms. The aforementioned study examined Protexo over non-TLA devices virtual devices in a sample of 282 individuals suffering from atopic asthma and lasted an entire year. According to the findings, participants showed less inflammation in the respiratory system, with the most severely ill to benefit more.

Announced the Results of the Initial Autopsy of Whitney Houston

Swayamvar 4:Veena Malik is Very Excited to Find her Love in India

Smartphone is More Often used by Students for Study [Research]