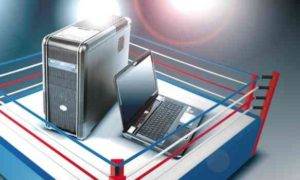 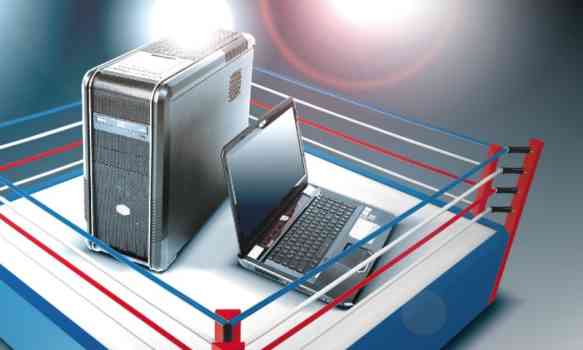 Notebooks are advertised with powerful processors and super-fast graphics. The mobile computer can really keep up with desktop PCs? We have made the comparison and discovered numerous vertigo in the names of the notebook graphics.

More and more buyers are choosing a laptop. Despite its compact dimensions, the device seems to offer a similar performance as a desktop – PC , which suggest at least the names of the components.

If the mobile computer really that potent? We wanted to know exactly and have three examples from three similar laptops desktop configurations can compete. They found that manufacturers sometimes deceive and conceal enormous to make their stand in the mobile hardware a better light.

The opponents in the ring

Here we used a different desktop graphics cards and compared performance. While the Lenovo ThinkCentre PC into a middle-class quad-core processor Intel Core i5 was built in 2300, performed in the high-end notebooks, the mobile versions of Core i7 2630QM (Acer, MSI) and Core i7-2820QM (LG) of their work.

The aim of the article is not to compare the laptops to each other, but to determine how powerful the mobile platforms are compared to a desktop PC.

Of course one can argue that comparing apples to oranges here, but, what really counts and that is simply the power that you get for your money.

Cheap notebooks and netbooks are often equipped with a low end Intel graphics, which for 2D applications such as Office and Internet is sufficient. Who needs more power to occasionally entertain with a game or HD movie, enjoys purchasing a laptop with Nvidia GeForce separate, or AMD Radeon graphics.

Can the power of a desktop map one to one transfer to a notebook? As a desktop graphics card is a Radeon HD 6850 (price from 130 €) for example, a recommended solution. The mobile version of HD 6850M disappointed, however, as our tests reveal.

Benchmark 3DMark Vantage the corresponding notebook achieved in the performance setting only 6300 points, points in FullHD (3DMark-setting “High”) even just unflattering 3827th The desktop reference graphics card from AMD achieved with 13 840 points (“Performance”)  and 9177 points (“high”) is more than twice as good a result.

Next, we looked at the Nvidia Ge-force competition in the form of the GTX 560 and GTX 560M to.The mobile hardware, Nvidia recommends for gamers, “received no compromise,” lays out a much better performance than the Radeon HD 6850M favourable. 3DMark Vantage (Perf) achieves very good 10 117 points in the “High” setting or at least 6415 points.

What is the reason for the huge differences? Here, a look only at the technical data. In the table on this page below we have summarized the most important parameters.

Crucial for graphics performance are the number of shaders as well as the processor clock frequency. One sees immediately that the GTX 560M and 6850M HD are inferior to the desktop versions. A look at the texture and the Pixelfüllraten leads clearly in sight.