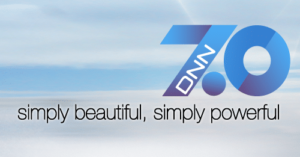 After the last stable release in August DotNetNuke is now in version 7.0 available .Since 2003, which was initiated in Visual Basic. System an opportunity to develop and manage Web applications on Windows represent the framework is as open source(community edition) and proprietary version available, with most innovations are found in the commercial versions.

Here it is now, among other existing modules to use in multiple pages, as long as they are in an instance. An auto save feature and the ability to perform file comparisons are to facilitate developers beyond life. The Enterprise Edition also includes support for SharePoint and allows Login with Active Directory credentials.

Available to all users, however, are an improved control panel including bookmarks feature and the option modules to drag and drop between panels or from the control panel in a panel. In addition, the installation process has been simplified, equipped with the Home Videos of the new features and updated the tutorial.