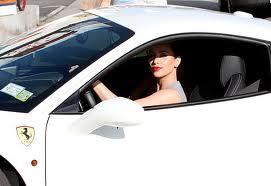 The star of the famous reality show Kim Kardashian  30 ,was spotted last week because of something slightly faster, and more likely to catch the attention of everyone a white Ferrari 458 Italia, reportedly $325,000 for its looks rather than speed.

The beautiful wife of basketball player Kris Humphrie  26, shelled out $325,000 for a pimped out new Ferrari in the start of last week, TMZ reports.  In L.A.,to pick up her white 458 Italia from Platinum Motorsport the reality star Kim Kardashian ,  got dolled up in heels which were  probably not the best footwear for that, and red lipstick. Platinum Motorsport is a boutique that caters to a many celebrities in which includes Nick Cannon, David Beckham and Ron Artest .

But according to TMZ ,this pricy Ferrari is not only  ride of Kardashian she also purchased the customized Rolls Royce Ghost in the bigning of this year which  has the starting price tag from  $255K.

Facebook will also Verify Accounts of Celebrities and Public Figures

Kim Kardashian Launched her Own Collection of Jewelry