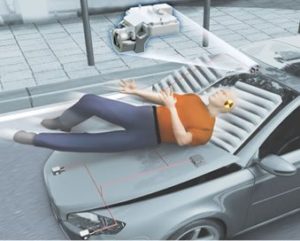 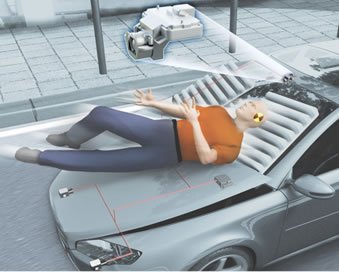 The Volvo traditionally innovative safety systems introduced the V40, a model that has the first airbag for … pedestrians. The V40 was presented at the recent motor show held in Geneva and has two new security systems consist of cameras and sensors.

The patron-air pedestrian The system continuously monitors the road, detects pedestrians that are on the path of the vehicle and alerts the driver . If he fails to react in time the system instructs the drive to reduce its speed. If, however, conflict with the pedestrian is inevitable start the second system that activates an air bag lying on the hood of the car.

The system lifts the back of the hood, thereby reducing the effect of striking while the airbag unfolds in front of the wind-shield to the pedestrian to fall on him. According to the executives of the company’s new security system greatly reduces the chances of the unlucky pedestrian to suffer serious injury from the collision and much more to lose his life.