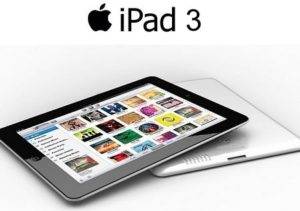 As you know, the first tablet Apple, released in 2010, the unthinkable stirred up the audience. Not everyone understood what he needed, but almost all the fans immediately rushed to iPhone buy a iPad. This tablet has become very popular, which are only numerous attempts to copy it. In March 2011, Apple showed the world the iPad 2.He was thinner, lighter, more powerful than its predecessor. Now the yard is 2012, which means that very soon the company, which recently lost its founder, Steve Jobs, should show us the new iPad. At least, that the world is waiting for “Apple” community.

We have tried to collect more or less loud rumors, assumptions, wishes, in short, all the information that only exists at the moment, that is, before the official announcement of Apple iPad 3. Let’s hope that at least some of these data is confirmed, they are too good.

Rumors about the appearance of 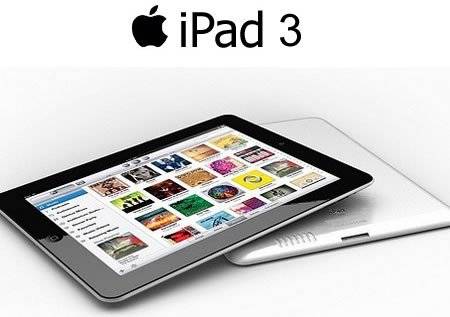 It’s funny, but the rumors started about iPad 3 occur on the Internet even when the iPad 2 was not even presented to the public. According to unconfirmed reports, the tablet iPad 3 was supposed to get high-resolution screen 2048 x 1536, moreover, he had to leave in the autumn of 2011, that is, six months after the release of second version of the now popular tablet.

As it turned out, was originally release iPad 3, indeed, had been scheduled for the second half of 2011. Now, however, reported that Apple is delaying the start of production until next year. This is due to the fact that Samsung and LG are unable to provide the necessary volumes 9.7-inch display with a resolution of 2048 x 1536 pixels for the device.

If the rumors are true, the new tablet will have a resolution of 260 dpi – the closest to 326 dpi the iPhone 4. While the resolution of the iPad 2 – 132 dpi. According to Mark Markowitz, an analyst Agency JP Morgan, had already appeared the first prototypes of iPad 3. Their design has changed significantly compared to previous versions of the device, but no details about when changes are made.

Analyst at FBR Capital Markets Craig Berger said that “ expectations of entering the market iPad 3 is not justified. ” The tablet also is only slightly modified, so it will be called the iPad 2 Plus (or iPad 2s). Referring to the builders of the new gadget, Berger said that the density of pixels on the iPad 2 Plus will be increased to 250-300 pixels per inch with 132 pixels per inch in the iPad 2. Of course, it is possible to believe in the statement of Craig Berger with the iPhone but if the situation repeated ( released after 3 3Gs, after 4 – 4s), that is the case with iPad 2, Apple has shown a completely new device, which in many respects different from the first version. So, most of all, and now is not to wait for the iPad 2 Plus, and iPad 3, especially since the competitors have long surpassed Apple in terms of technical characteristics of the tablets still remain elusive speed and convenience of iOS.

More recently, the network has information that the day before CES 2012 was detected iPad 3. Resource Editor iLounge said that he personally saw a new generation of iPad. The editor claims that could even show a photo, but it makes no sense, since the new iPad is very similar to its predecessor.

Reportedly, the iPad housing 3 to 1 millimeter thicker than the body of his predecessor, for a more powerful battery, the camera in the upper left corner has become much larger, it is similar to that which equipped the iPhone 4S. Major changes can be expected only in the display, but it will not be noticeable at first glance. Recall that in 2011 the first day of CES iLounge is shown the first photos of the body iPad 2. Depicted on these device looks identical to the tablet, which was later introduced Apple, except for small details.

Rumors about the hardware

Once the new iPad will get a screen with a resolution four times greater than that of an existing computer, and then the question arises about whether Apple will not replace the processor? Some sources claim that Apple A5 graphics PowerVR SGX 543MP2 not able to cope with the task. Moreover, increasing the resolution entails a growth in energy consumption, so Apple will have to solve the problem of reducing battery life. To help avoid the problem of excessive power consumption must processor Apple A6 (more speed, less power consumption).

Industrial sources report that Apple plans to deny service to the corporation Samsung. It is rumored that in 2012 Apple will be a key partner of another contract manufacturer, TSMC. If TSMC will manufacture chips for making U.S. corporation, it will soon take the place of Samsung.

Further evidence of the presence of 4-core processors in the future Apple devices found in iOS 5.1. beta. In the inner code, the beta version of the operating system iOS 5.1 was found appropriate record. It is anticipated that specify the number of cores microprocessor designers use Apple specific references.

For example, if processor contains a single processing core, the code is a link / cores/core.0. At least, this trend is clearly discernible in iOS-compatible devices, the previous generation. Dual-core A5, which today are equipped with smart phones iPhone 4S, Tablet PC iPad 2, have a code / cores/core.1. In iOS 5.1 was found entry / cores/core.3. I think there is no doubt that it points to support the quad processor.

It is assumed that Apple and TSMC will jointly develop a new processor Apple A6 based on 28-nm technology. It is not excluded that the decision to change the partner was motivated by a desire to punish the Samsung, which Apple has a claim.

Bloomberg briefly reported that industrial partners began assembling Apple iPad 3, which will go into full capacity in February, with the upcoming release of the device in March. Post confirms the rumors of roving that the new iPad will be equipped with a 4-core processor and high-resolution display Retina.

“Three people close to the suppliers report that the company Apple (AAPL) will launch its new tablet iPad in March. The device is equipped with a screen with high resolution, work at a faster processor, and support networks of LTE …”

“Apple includes support for LTE in the iPad before the iPhone, since the new tablet is equipped with a more powerful battery and it will be better support the requirements of the new technology.”

There are also rumors about the presentation of two models of the most popular tablet for 26 January «iWorld».Both devaysa get quad-core processors will be manufactured and A6 with the “classical” 9.7-inch diagonal, but with a resolution of 2048×1536 pixels. Bright displays with dual LED-backlit display will supply Sharp, Samsung and LG.

The differences will be in the amount of batteries and photo module devices. “Older” model will get the battery, Ultra-14 000 mAh and 8 megapixel camera, get the cheaper standard battery of 6500 mAh and photomodule 5 MP. On the other differences is not known. Moreover, iPad 2 when it will not withdraw from the market, but only make it cheaper.

Fairly recently it was rumored that Apple will release a 7 – or 8-inch version of iPad, but it is unlikely there will be iPad Mini in 2012, according to analyst Brian Blair Wedge Partners (Brian Blair).

According to Blair, iPad Mini Apple has tested more than a year, but the company is not going to launch this product in 2012. The analyst believes that the main problem for Apple is to reduce the cost of devaysov, but the company can work in this direction, without making compromises in the area of ??the screen diagonal.

Wedge Partners said that the Apple iPad after the launch of three leaves on the market iPad 2 at a reduced price. This is not new to Apple – for example, with the launch of iPhone 4S, the company left the market and even the iPhone 4 iPhone 3GS, which is given to customers free of charge at the conclusion of a two-year contract with the operator.

Hearing about the price and release date

According to Focus Taiwan, Apple is planning to release iPad 3 to the birthday of Steve Jobs – February 24. The fact that an American company in a hurry to release a new product (which is likely to be iPad 3), according to many vendors Apple.

On insider information received before the New Year, members of the Asian companies, factories which produce components for the tablet Apple, working overtime. To release the required number of components, they will even go without the Christmas holidays. For example, it is reported that only Foxconn prepared from 9.5 to 9.7 million new iPad. It is expected that the first batch of iPad 3 will be about 4 million tablets.

Initially, the Taiwanese trade publication wrote that future third-generation iPad will appear in March and the fourth generation iPad with a “killer applications” – in October 2012. John Gruber (John Gruber) from Daring Fireball believes that the march – “absolutely accurate” period for the emergence of iPad 3, but the exit «iPad 4″ in October – “nonsense.”

Eric Slivka (Eric Slivka) reported with reference to the Japanese blog Macotakara Apple plans to introduce the public to the new iPad tablet 3. According to the report, a press conference held in early February 2012, while sales of new products will start in March. In addition, it is possible that during the event will also provide iOS 5.1, which is now testing the developers.

In the above statement emphasizes its rationale:

“According to information from Asian suppliers and from a source in the United States, apparently, Apple is preparing for a special event in early February. As Chinese factory will not work on the occasion of New Year holidays, a new product decided to release in early March.”

On the other hand, the output of a new tablet, 24 February, before the show MWC, which will be held February 26-28, will be unlikely. And at a conference Apple iWorld, which is superimposed on the dates of a MWC, it makes no sense to show a new product. But after, in early March – the perfect time, because All companies have their new show and you can show off on their background. Although, perhaps, Apple will show us something new in early February, but then strange that now is an incredible calm.

Price the iPad 3, is likely to be a bit more than now is the iPad 2, may be more expensive at $ 100. But with the release of iPad 3, Apple dropped the price on the iPad 2, to allow the last “run over” the growing competition from budget Amazon Kindle Fire. This is possible if stoimot iPad 2 in the base will fall to $ 399 mark, according to a source iLounge.