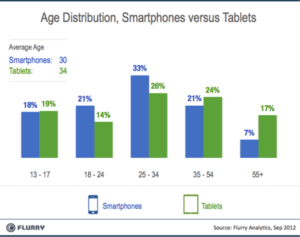 In an attempt to better understand the growth of the market for tablets and smartphones , Flurry Analytics has conducted research on a sample of 30 million consumers useful to paint a picture of who is using the device types and for what purpose. Who has a digital tablet is usually a few years older than those with a smartphone and use it more often late in the day, especially to play.

The owner of a tablet is usually women and has an average age of 34 years , while only one third of the sample and hold tablet has less than 25 years. The users with a smartphone are predominantly males, on average, 30 years and only about a quarter of them have more than 34 years. The differences between the holders of the two types of devices become more important after 55 years, with 17% of the sample in this age group have a tablet and only 7% have a smart phone.

If the use of the smartphone is more evenly distributed throughout the day, that of the tablet is greater between 19 and 22; consumers spend some time with his digital tablet mainly for entertainment, while those with a smartphone often use the device to communicate and to carry out activities such as social networking. The data seem to confirm the tablet a little nature mobile and very homely, which changes the meaning in many cases that the market has developed around the idea of the iPad and its rivals. Also interesting to note how the gaming is popular on both types of devices, representing 67% of the time spent on the tablet and 39% of time spent on smartphones.

Through this study it was also found that owners of a mobile phone using the new generation of applications much more frequently than owners of a tablet, albeit for short periods of time: the first using the 12.9 against 9.5 times a week times of seconds, but those who have a smartphone spends 4.1 minutes of your time per session compared to 8.2 minutes for those who own a tablet fruendone quietly and display more generous and comfortable.