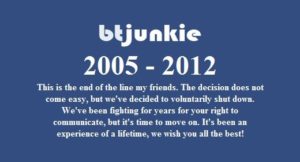 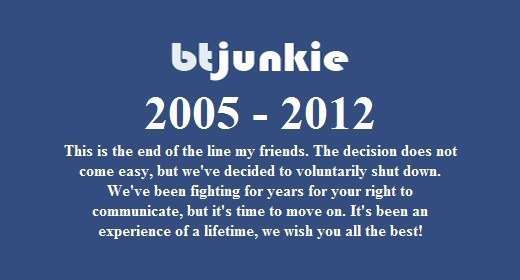 One of the most visited BitTorrent site  in the world “Btjunkie“, has suddenly decided to close its doors. Although the portal has never been involved in legal actions, the founders chose to cut the Gordian knot and store it all before, in the wake of what happened at Megaupload , someone might “interest” to them. No press sounding the end of an adventure to communicate lucky began more than five years ago, but a few simple phrases of undoubted efficacy.

“This is the end of the path my friends. Making that decision was not easy, but we have voluntarily decided to close everything. We fought for years in favor of your right to communicate, but it is time to turn the page. It was the adventure of a lifetime, we wish you well, “reads a statement issued in the last hour on the pages of the official site (not accessible except by proxy from Italy because of the ban imposed by the authorities).

Interviewed later by TorrentFreak, the founder of Reactor admitted that the heavy judicial action against portals such as Megaupload and The Pirate Bay have certainly helped to make this difficult decision . Nevertheless, he persevered and they say sure the torrent scene is not finished and that, indeed, the war is far dall’avviarsi a conclusion in favor of the opposing party. In supporting the battle, however, the direct question vanishes, takes a step back and look for cover behind a voluntary action by threats of expulsion of the law.

Although it was never taken particularly targeted by the copyright owners, was reported to Reactor ‘  U.S. Trade Representative in November, while the RIAA and MPAA were listed on the site between the portals where the mass violation of rights’ author was encouraged. The site was also censored by Google with reality just as important as The Pirate Bay, and RapidShare uTorrent. In short, he preferred Btjunkie close shop for good before the arrival of a storm can sweep all.

The ‘ arrest of Kim Dotcom before the closure of Megaupload, has probably left a mark where a guilty conscience may suddenly ignite. The closure is part of the site in fact a corollary of backward steps at all significant: Megaupload with the copyright industry has sent me to sign one of the most important shots in the history of the fight against piracy.