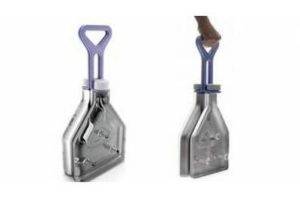 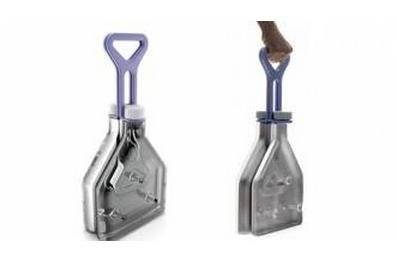 This is a development made on the basis of drinkable heat and ultraviolet (UV). The bottle is flat and uses the same materials as disposable containers.The economical and practical design that will bring thousands of families access to safe water.

The reality shows that only a sixth of the planet has access to clean water, and that every year about two million people in the world for this reason.
In this situation, the industrial designer Francisco Gomez Paz Salta and the Italian Alberto Meda created the “Solar Bottle,” a design capable of purifying water and render it suitable for consumption by the simple action of heat and ultraviolet (UV) radiated by the sun.
The difference is in the package diagram The project consisted of a container domestic use in PET-a polymer used in recyclable containers of mineral water and soft drinks-which is able to destroy viruses and bacteria in drinking water with zero. The bottle method works on the Solar Water Disinfection, or SODIS.
Paz Gomez chose him for his design of solar bottle with water that manages to produce a bacteriologically safe sun exposure for six hours. Here, ultraviolet rays and solar heat are mutually exclusive factors that cause the purification. With this method, for drinking only need two items: a bottle and a sheet of metal (usually used a common sheet). But in seeking to improve the practicality and efficiency of the system, the Argentine and Italian worked on the Solar Bottle project.

We wanted to improve the system using a specific bottle and bring their benefits to the fullest. But also try to solve problems such as transport, without losing sight of the idea of an aesthetic object with dignity, “Gomez said .

The researchers’ prototype is a bottle of flat which has two solar receivers that located on both sides of the container.One side is transparent and has the function of storing the ultraviolet rays, while the other has an aluminum foil which serves to increase the temperature inside the container. This design improves the process SODIS purification and eliminate pathogenic microorganisms that live in contaminated water. The bottle meets four important qualities:
* Effectiveness: After about six hours of sun exposure, it produces 4 liters of water with microbiological safety.
* Ease of transport: By weight and format (it has a handle), it can move with one hand. And it is equipped with a mechanism to unite with similar container and thus doubling the amount of fluid brought.
* Affordability: The price is equivalent to the expected end of a bottle of water. Because rural areas often coincide with low quality aquifers, and population of less purchasing power, low cost solar bottle became an essential requirement.
* Ease of use: The decontamination process requires only exposure to sun. The handle of the container, as well as serving to load, provides the necessary angular adjustment to optimize exposure to the sun bottle. The package was created with a modern style, who are thought-facilitate its acceptance. However, Gomez Paz is still in search of their mass production.

We continue with the ongoing development project and have made considerable progress. We defined the final geometry and even took the mold and there was a pre-set with which we have done tests of resistance, “said the developer.

However, the delay of years in the project is not a minor issue. The solar mass production of bottles could be part of the solution to a global problem. Is it enough to say that in the world every 24 hours, 4,500 children die from diseases related to unsafe drinking water intake?
Spread the love

Video-Brush “Tooth Guardian” Show the Oral Cavity from the Inside