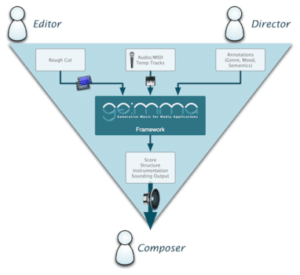 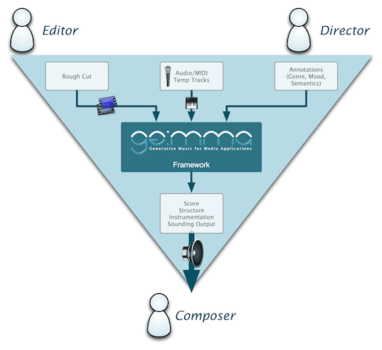 Movies work best with appropriate music. This is a action movie as well as in a video image. Scientists at the Institute for Creative Media Technologies Fachhochschule St. Polten have a software called Gemma developed (“Generative Music for Media Applications”), can use the musically untalented people create an interesting soundtrack, reports Technology Review in its online edition.

In this case, the system works with no sheet music or keyboards, but with semantic requirements: from users choose from several terms that describe the scenes and put the music together so step by step. Film genres can be chosen as emotions that the characters feel, or act passages. The selection is made by pull-down menu.

When configuration is a term such as “tense”, for example, for a high violin passage, the term “war” for military played drums. Which passages correspond to which style of music selected from Gemma using a database of 500 scenes from 250 cinema blockbusters put together soundtrack and description. So “learns” the software, what the terms and created a description document.

The final composition is not simply due to the crib of tone sequences in the movies, but “based on mathematically formulated laws of compositions,” as the researchers explain. The result is a signal output as a MIDI file music piece that can be used royalty-free and can be further processed with music editors such as Steinberg Cubase, Ableton Live and NI Core.

Alternatively, the system can also specify a reference music which based on the composition of the algorithm.

BRONZE: New Music Format Changes to the Same Song Every Time I Hear it!