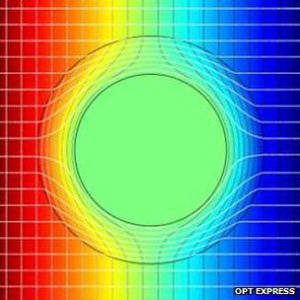 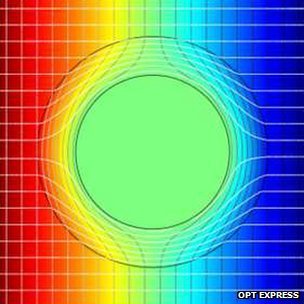 An idea does not seem too out of a Hollywood script could become a reality following the theoretical demonstration of a group of scientists in France. The possibility of an invisibility cloak could have a new actor: the heat .

The idea has been published in the journal Optics Express . An investigation where a team of scientists from the Fresnel Institute in France have shown how to apply the ideas of optical camouflage, much like Harry Potter layer, in the world “thermal”. And have an idea that could be used to steer and move the heat around the temperature sensitive electronics .

The research part of what is known as transformation optics, the first study proposed in 2006 as a means to an invisibility cloak. So far all approaches encounter the same problem, limitations in camouflage invisibility levels remained well below what we’ve seen in fiction. Recently similar ideas have been directed to protect objects of magnetic fields or even sound or seismic waves.

Most of these approaches aim to manipulation of the peaks and troughs of the waves in order to achieve the camouflage effect. For the new study, the new actor, the heat would act differently. According to Sebastien Guenneau, Fresnel Institute:

The heat wave is not simply diffuses from the hot to cold regions. Mathematics and physics in a very different play. For example, a wave can travel over long distances with little attenuation, while the temperature is usually disseminated in small distances.

As told, the “trick” was to apply the mathematics of transformation optics of the equations describing diffusion. According Guenneau and colleagues have found that it was a means to transport heat at will.

They proposed a layer made of 20 rings of material, each with its own “diffusivity” understood as the degree to which it can transmit and dissipate the heat. According Guenneau:

We can design a blanket for heat to be spread around a region of invisibility, which is protected from the heat. Or we can force the heat to concentrate in a small volume, which then heats up very quickly.

A theory must be tested in practice and as these researchers suggest, would have the ability to direct and concentrate the heat . In which case could be applied in the microelectronics industry, where the heat load in specific areas remains a challenge for engineers.

A Frozen Plant Revives After 30,000 Years