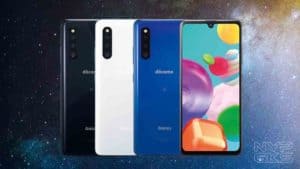 The era of compact smartphones has passed irrevocably for most manufacturers and with the exception of clam-shell folders. (see Galaxy Z Flip, Motorola RAZR) and iPhone SE (2020) it is rather difficult to find a device on the market that has a more normal size. The Samsung , however, afford to offer this solution thanks to the expanded portfolio of series Galaxy A .

This year’s compact proposal of the company is the Samsung Galaxy A41. It is a smartphone that we had the opportunity to use for several days. We want to convey our conclusions to you. Its nominal price is at € 299 , but you can already find it at a much lower price without much searching.

Before we start the traditional structure of the review, let us mention that the device we received is a test model and came without its box. We know, that the package includes a 15W charger, USB Type-C cable and wired headphones.

Unlike other models of this year’s Galaxy A series, the Samsung Galaxy A41 does not have an Infinity-O screen (hole in the center of the screen), but Infinity-U (drop in the center of the upper bezel). The company chose to combine last year’s appearance on the front with this year’s camera rectangular camera module on the back, which includes three sensors and an LED flash.

Overall the construction is a combination of glass with plastic that may seem cheap to the eye, but in reality you feel it beautiful and solid in the hand thanks to its curved corners. The light weight (152gr) is, however, something… unprecedented for today’s data (except for the iPhone SE 2020), while it is quite thin (7.9mm) although the camera module protrudes a little more.

We have reached the year 2020 to characterize as compact a smartphone with a size of 6.1 ”, but this is the truth. On the Samsung Galaxy A41, the screen is one of its top features, as it includes a Super AMOLED panel with FHD + resolution (2400 x 1080, 20: 9 aspect ratio, 431ppi) that guarantees top color performance, high contrast, satisfactory brightness outdoors and wide viewing angles.

Those of you who are in the mood to play with colors, it is good to know that there are options in the settings menu for their more natural or saturated performance. There are, of course, the blue light cut-off functions for a more relaxed reading in low light conditions, the Always On Display with three separate modes and the option to illuminate the sides when there is an incoming alert.

What a Super AMOLED FHD + panel promises, this is what the Samsung Galaxy A41 offers in this price range. An excellent viewing experience both in simple daily use and for content monitoring.

The surprise from Samsung is that it set aside its own Exynos processors and opted to use the octa-core MediaTek Helio P65 SoC (12nm) which includes 2 high performance Cortex-A75 cores clocked at 2.0GHz and 6 Cortex cores A55 at 1.7GHz, but also Mali-G52 MC2 graphics processor. With it we find 4GB of LPDDR4x RAM and just 64GB of eMMC 5.1 storage (expansion up to 512GB with microSD), in perhaps the most disappointing features of the device.

It is a fact that the Samsung Galaxy A41 does not fly in performance and is mainly intended for normal use by an average, non-demanding user. When we say “non-demanding” we mean the one who will not base a part of his work on his smartphone (see multitasking), nor does he intend to play the most “heavy” mobile games. In classic casual games, browsing social media applications, browsing, YouTube, Spotify, etc., the device responds very satisfactorily without crashes and overheating of the processor. However, if you attempt to shoot video for a long time or switch from application to application relatively quickly, then there are slight delays in the user interface response.

Regarding biometric unlocking methods , the in-display fingerprint sensor works quickly and reliably, while for face recognition there should be good lighting to have an immediate effect.

For the rest I note that the handset is fine, but the speaker could be better, as it is not very loud and the bass is non-existent (as in most smartphones). However, with the use of headphones, the result pleasantly surprised us because there are effects of Dolby Atmos technology and equalizer to adjust the sound according to your tastes.

In terms of autonomy , when you choose to build a slim smartphone you have to make some discounts on its creatures. We had a long time to see a battery with a capacity of less than 4000 mAh, since the Samsung Galaxy A41 has 3500 mAh . They seem small, but in practice it turned out to be enough for you to comfortably get a day of normal use with one charge, maybe even more if you are more prudent.

The results from our downloads were exactly what we expected from a device in this category. Very good performance if you shoot in daylight, wide range of landscapes (although we do not avoid this barrel effect either), nice portraits with a little more artificial blur and correct color rendering. As the light decreases, the noise becomes apparent and especially at night the quality decreases dramatically. Note that there is no Night mode to help your shots, so if you have the Galaxy A41 in your hand you will need to train a lot at night to take good photos. For video capture we simply mention that it supports 1080p / 30fps resolution and you definitely need a stabilizer of the device to achieve a satisfactory result (there is no optical or electronic stabilization system).

In the part of selfies, the notch-drop hides inside the 25MP f / 2.2 sensor that gives a solution to do your part on social media. However, even in this case it limps in low light conditions.

The Samsung Galaxy A41 offers specific things, just like any other Galaxy A series device. With this model the company wants to cater to the public looking for a compact device with a very good screen. The camera is good in daylight, the performance is good for those who do not have high demands and the autonomy is also good so that you do not carry a charger or power bank with you during the day. Anyone who wants something more, then should look at the larger numbers in the series that of course cost more.