What are the resolutions for 2013 of IT companies? What they have in there minds, giants such as Apple, Google, Microsoft or more specifically their creators: Cook, Page, Ballmer, Ive? Joy of Tech is explained in a new cartoon.

Sometimes it seems that IT organizations behave like children . The legal wrangling in general or certain events and situations that are created do think the giants, by which circulate large amounts of money around the world, like a big infants that collide with one another to have the lion’s share big cake.

Below is a cartoon that shows some of the resolutions for the new year for the most important exponents of the world of consumer electronics and information technology in particular. 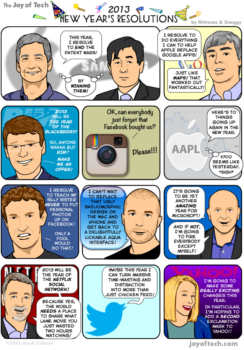 Among the most hilarious we find that in common between Tim Cook (Apple CEO) and Kwon Oh Hyun (CEO of Samsung), who want to put an end to legal disputes between them “, winning ! ” A Larry Page (Google CEO) who wants to help Apple to replace Google App on iOS with the Apple … as it has done with Google Maps.

But analyze them one by one, transforming them in order from left to right, top to bottom: