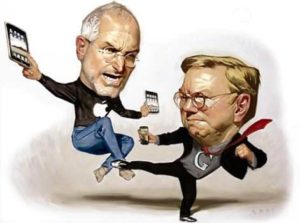 In a very interesting interview with the Wall Street Journal, Google CEO, Eric Schmidt has granted a number of interesting revelations about the endless lawsuits between the Mountain View company and that of Cupertino. Schmidt also responds to a series of comparisons in relation to the similarity of some characteristics similar to those of iOS, on Android.

The Wall Street Journal  interviewed the Executive Director of Google.Recall that Schmidt has chaired the board of directors of Apple when he had the role of CEO in Google. Precisely in relation to this situation, potentially risky for conflicts of interest, Schmidt was fired from Apple’s board of directors.

When asked about the legal situation with the Cupertino Company he says:

Apple and Google are well aware of the legal strategies of the competitor. It is so strange that Apple has not yet sued Google itself, but only its trading partners.

Schmidt talks of course the age-old dispute between Apple and Samsung but also of other disputes still outstanding against Motorola or HTC..The dig seems obvious: it’s probably a warning to Apple that, according to Schmidt, it could be burned out criminal proceedings against Google.

When asked to provide more details on the relationship between Apple and Google, Schmidt replied:

There have always been ups and downs. Of course we would have preferred that they continued to use our service maps and that they had “thrown out” YouTube from the Home Screen. I do not know why they did.

The press would like us to have a relationship of competition adolescent type, such as “I have a gun, you have a gun. Who shot first? ”

But things are not like that. Is there a way to manage the affairs adult: the various companies have disputes, but there have been many occasions when we had the opportunity to exchange huge.

In the interview, he also talked about the comparison between Siri and Google Now. The Executive Director stated that personal assistants are part of the “competition of products that exploit the Internet but do not conform to the Web.” In addition, we read from the interview that Schmidt is still convinced that Windows Phone 8 is a dangerous competitor to Apple and Google.