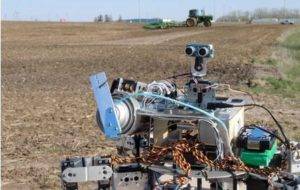 The present level of development of robotics allows you to create various robots. In the U.S., for example, was created fully autonomous robot farmer Prospero, who is able to sow seeds. 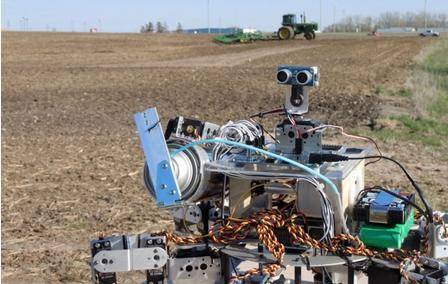 Developer and creator of the farmer’s Prospero is Dorhaut David, American inventor, who lives in Iowa. He claims that his creation is based on teams of software, can sow the seeds of certain plants in certain places the garden and remember their location.

In Prospero provides for the possibility of contact with other robots farmers. So far, it uses infrared range, but David Dorhaut intends to use more modern technology in the further modernization of the robot. At the moment, Prospero can “communicate” with their peers at a distance of three meters.

The inventor spent several successful tests Prospero. During the last test iron farmer, moving on six feet, planted a small plot of corn fields. Mr. Dorhaut will continue to further improve its development. He believes that robots can be trained not only to plant the seeds, but also to perform other work necessary for a subsequent harvest. This includes the processing of the beds, removing weeds, watering and much more.

The creator of Prospero believes that robots farmers can significantly improve the performance of agricultural labor in all countries. Contacting each other and sharing information about the type of soil, they will be able to determine, for any seed favors the current environment. The process of determining soil type robots farmers was not described by David Dorhautom, but he shared the principle on which Prospero learns that in this place already planted the seeds of the field. To do this, the robot uses regular white paint, harmless to the soil. The place where the seed has been produced, there is a small spot of paint so that has properties to reflect light. He is captured by special sensors, and transmit those signals to the computer brain of the robot, causing it to move to another location in the field.

American inventor does not dare to say when his robots will operate in other countries around the world. He is now busy improving the design of Prospero, including its power supply system. According to David Dorhauta, his robot is already interested farmers from different countries.