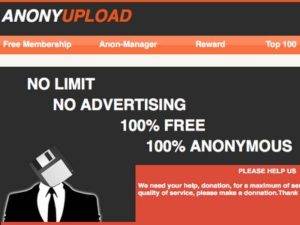 Megaupload seems to have an heir official arrival. The application was made by Anonymous, and the project will start on January 25 under the name of Anonyupload. This is a work in progress throughout the embryo: lack everything, but it lacks the determination. The site makes it clear their intentions and their strategies, but now does nothing but ask for donations.

In these hours would be put in place various scams to ride the wave of disappointment after the fall of Megaupload (why this project must also must be looked upon with suspicion), but compared to other scams Anonyupload pain enjoys the benefit of combined doubt themselves Anonymous have spoken via Twitter, explaining that they do not have elements about the legality or otherwise of the project (a group Anonymous are not hierarchical and therefore it is plausible that one can not give official confirmation), “in Many are asking whether it is legitimate or not, we do not know. You have to prove it to you. “

Free, no ads and 100% anonymous : Anonyupload says at this stage they need help to buy servers and hard drives, the basic requirements for setting up the structure, the promoters hope, will take up the legacy of Megaupload and let just the traffic previously carried by the group of Kim Dotcom. To put the idea into motion, however, need money and therefore ask Anonymous donations to be made via Visa, Mastercard or American Express is hard for these systems is likely to remain standing in a diligent and cutting bridges between payment systems and set the destination Anonymous.

“Every user will have an FTP account and can easily transfer and share files using this access.” But with a further promise: “For your security, we will use servers in Russia. ” In short, far from the U.S. authorities and the ambitions of the U.S. , which have laid their trap for Megaupload thanks to the collaboration of European and New Zealand .

This website does not miss a special thanks to Kim Dotcom , a number of Megavideo and Megaupload, for his service to the community in the years of file-sharing. Now his legacy will be functional by Anonymous collection which, once the wave of protests which were sunk several U.S. sites, are now trying to find a constructive approach by putting in place a new Megaupload.

To date, however, only words and promises have yet to begin the first upload and spread the word on Twitter is multiplied by the hour.