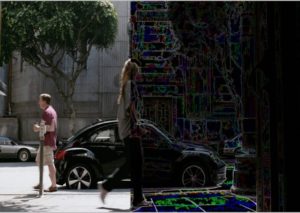 That’s a long time we used Vector Graphics for images and a little less time in animations as Flash. The Vector Graphics has a huge advantage over bitmap (image composed of points) can be modified in size and resolution without the quality deteriorates, since the computer will calculate the results again given by vectors equations  for display a new image.

Detail of Research about Vector Graphics

Researchers at the University of Bath (England) announced that they have made ??significant breakthroughs in transforming video bitmap to vector Graphics format, which opens new perspectives very interesting in many areas.

Indeed, a video once passed in vector format weighs more than a small part of the weight she bitmap (composed of points) and if we decide to increase the resolution, there will be no effect Stair visible. Of course, this is theoretical, and the image can be displayed larger, it will take more vectors smaller to view details invisible in small definitions.

This will require a strong upstream work to transform videos, vector coding, while preserving alongside color data, and also an important work of decoding computer, since the processor unit responsible for restoring these videos will be very important for calculations show videos.

But it is a very interesting way while industrial 4K display now want on our televisions and network bandwidth or storage media are struggling to evolve. Eventually, we can assume that if the system happens to win, it will natively on most capture devices, cameras or cameras. Sign that somehow the end of the battle the number of pixels more important since they no longer serve to allow the calculation of vectors and it would be possible to extrapolate an image taken on a device few million pixels as if it had been taken on a sensor with many more pixels.

Do you think that  the “Pixel About to Die”  after reading the above research about  Vector Graphics in this article ?