Stefan Esser is usually teasing his followers on Twitter. We report this news with all the necessary precautions because on one hand there may be a grain of truth , on the other hand, unfortunately, may be of yet another of his pranks.

The offending tweet today, said: “Yes, I just got a Beta of the new tool to jailbreak iOS 6.0.1/6.0.2, M00nsh1ne, as a Christmas present” . It was published just a few minutes over another conversation in which mocked users who believed the false jailbreak a few days ago, the Dream JB . 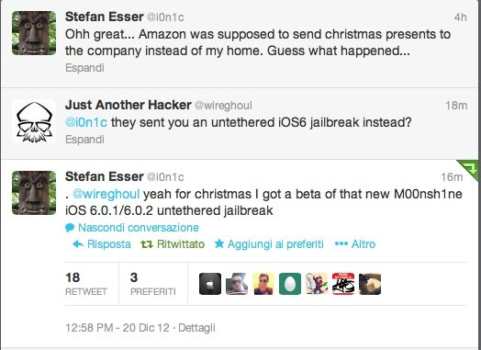 Besides, we remember that the same i0n1c had warned everyone that there would be no jailbreak for iOS 6.0.1 , probably not “burn” the exploit to jailbreak a short-lived, and use it directly with iOS 6.1. The declaration of today, therefore, it would seem even in contrast with the statement made by him only nine days ago.

The hope for Untethered Jailbreak of course remain

Who knows what the various dev-team will not make us find a new stable tool for untethered jailbreak of our beloved devices under the Christmas tree as early as next December 25.