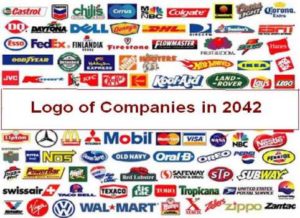 Website designing Firm “Stocklogos” has published series of pictures of the logo of the manufacturer on the market. According to the people here, the logo design to change in a positive direction and more reasonable with the community. Here is the list of logo, to see if you recognize them again!

Microsoft’s logo will be “flat” from the Windows logo.

LG will make the use laugh future?

Car maker Volkswagen will have to change the logo of zig zag lines like the rise and fall of the automotive market.

Star Bucks seem to tend more and zoom closer to your logo.

Google will return to correct your images.

Firefox will hold a globe contaminated?

According to the designer, it is likely the company M & M will buy Motorola in 2024.

This logo design should also even “categories waist” Nokia will disappear by 2015.

Due to excessive obesity should in future KFC will be produced from vegetable products?

With the development of transport, in 2035 Ford will make flying cars in 2065 and is …spacecraft.

Sure IE was a community known for Meme.

Coca-Cola will not change no matter how many years go.

Shell fuel company in the future will switch to solar energy production.

Consequences of drinking too much Pepsi.

Is this a future not clear for IBM?