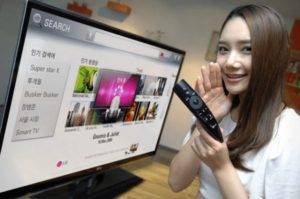 Remote model by LG last year allow you to navigate to any one 2011 LG Smart TV, just as you would with a Wii, and update brings a new ergonomic design and adds voice recognition for entering text, a scroll wheel, and “magic gestures “.

At present it is not clear, what exactly is meant by “magical” gestures do, however one of the examples given by the company that is creating an imaginary «V» with the remote control will display a list of Latest featured videos.

The remote, also has a brand new 3D button that will activate the digital conversion software 2D image in 3D, something that might not be particularly useful, although you will spend some time with him playing. Also, what is not yet known is whether it is compatible with previous models, but at least it will certainly be compatible with those of 2012. The LG, says it will be available during the first quarter of 2012, so expect to see it presents itself at CES in January.

Apple Wants to Turn the iPhone into a Universal Remote