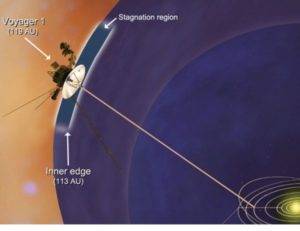 According to Ed Stone, project scientist of the Voyager, the California Institute of Technology in Pasadena, “Thanks to Voyager will be able to see how is the space between stars’.

The same NASA describes it:

weighing 1589 kg The board Voyager 1 started its journey in 1977, is a very good condition, traveling at 17.7 km / sec and continues to send data and measurements from a distance of 17.7 billion miles from the sun. This makes it the farthest from Earth object constructed by humans and possibly the first probe to escape from the confines of our solar system within the next five years. Like its sister Voygaer 2, so the Voyager 1, carries a gold plaque with photos of the Earth and its inhabitants, as well as audible greetings from the type “Homo Sapiens”. The thermoelectric generators satellite expected to supply it with energy at least until 2025.

“iPad will be Very Useful in Space” – The NASA Said

A Star Provides Clues About the Future of the Earth