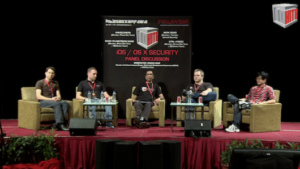 Awaited the arrival of the jailbreak for iOS 6. The best hackers including MuscleNerd , Mark Dowd and Pod2g meet to discuss what to do. Here are the key points that will help us to better understand the situation.

A few months ago, Pod2g , MuscleNerd and other hackers had a discussion Hack in the Box conference in Kuala Lumpur in Malaysia . Several topics were touched but the main focus of discussion was on jailbreaking.

Below is a video of the conversation just uploaded yesterday:

Once again, from left to right Mark Dowd, better known as mdowd, pod2g, HITB’s l33tdawg, MuscleNerd and planetbeing. Except for l33tdawg, these are guys who are working to jailbreak iOS 6.

Definitely worth watching the whole video, but here we list a few points worth noting:

As always, we will post as much information as we have available as soon as we receive. What can I say .. stay tuned!