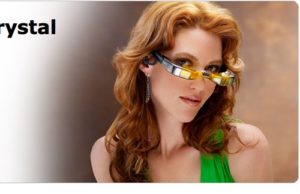 Google is planning to augmented reality goggles that show real-time information through a digital processing system.

The Google technology in the home is evolving to look forward. The latest news coming from Mountain View in a non-official cover a prototype of a device that presents itself to the outside world like a pair of sunglasses can offer up to date features never before seen in this type of product. Following closely in the wake of what was seen in some films, in fact, these HUD glasses allow you to view a range of information based on your location and the data obtained from the Internet in real time.

This is essentially a digital processing system built-in Wi-Fi and Bluetooth 4.0 integrated within a couple of lenses , whose development has for the moment gave birth to a series of prototypes on which he managed to get their hands an anonymous later revealed as seen in 9to5Google, although the search giant is keeping the most absolute secrecy about the project. The latter, moreover, has been for several weeks at the center of rumor and because of the details provided in the last day you can better understand what is being developed in Google Labs.

From the aesthetic point of view, the glasses made in Google appear quite similar to the Oakley Thumps , which have a number of useful buttons for playing music in MP3 format. To enrich the whole there is then a camera with a resolution of a few megapixels and flash to take pictures in low light, which is also one of the tools with which the computer system is able to identify which information may be more relevant to show on one of the two lenses, which do not appear to be transparent.

Unlike the early rumors suggested, it would not be an enhancement to the service of Android devices. On the contrary, to animate the prototype would be just the OS of the green robot, although the technical point of view of connectivity leave us to guess the ability to connect goggles HUD smartphone and other devices to take advantage of the Internet connection. In terms of hardware equipment, however, suggested specifications are quite similar to the first smartphone based precisely on that operating system and in the drafting of a possible 9to5Google configuration may include a 1 GHz microprocessor, 256 MB of RAM and 8 GB for ‘ data storage.

As mentioned, these glasses were designed to show on one of the two lenses (probably made by LCD or AMOLED technology) additional information about your location, by standing in law to a top position in the scenario of devices oriented to reality increased . All this will be achieved through convenient menus through which you can navigate through a system-based input on the slope of the head, which in the long run would seem to be fairly simple to use and above all completely undetectable by other people. The commands also can be sent by voice.

At the moment it is not known when Google plans to launch a similar product, or on whether this will never happen: the giant of search feeds are big doubts about the impact of these glasses HUD, to which may not be a strong interest from users, decreeing that the failure of a project rather ambitious. In a first step would seem that the Mountain View company intends to conduct the test by offering the opportunity for some people choose to use the glasses for free to receive early feedback on what was achieved, after which it will decide what to do.

In this project, finally, seems to have a major role the acquired Motorola , which has already initiated its own with Oakley in the past similar projects resulted in Motorola O ROKR Pro Bluetooth device. The addition of services that Google may introduce (Android, Google Maps, Google Search, Google Goggles and others) would transform the simple dream of sunglasses in the world nerd: the true augmented reality at this point would be a step away.