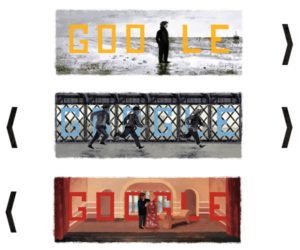 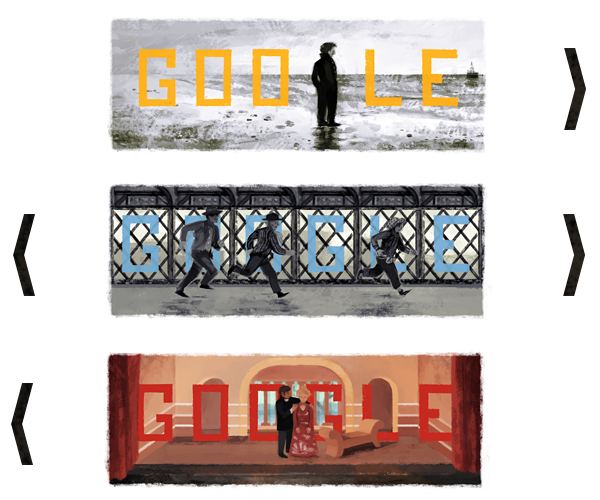 Google has experimented with a new, additional concept doodle: Three logos into one , held together by a button to activate the slide and slide forward and backward of the three available representations.

The occasion is the 80th anniversary of the birth of  Francois Truffaut , sacred monster of the film and a lead role both as a director, as a screenwriter, actor, producer and critic. To celebrate the event (that Google chooses now with the semi-random, honoring occasions or for people without a preconceived scheme), the idea is to put into play a series of interactive doodle. If now on the homepage of the search engine had already seen other logos, interactive games and other animations, never until now had three logos together in one hand.

If, for lovers of film will be curious fact identify the three scenes depicted in the doodle, from technological point of view is emphasized instead another proof of the will to demonstrate the technical possibilities that Google is able to field using a logo that icon ago and that leverages the quality of development to enrich the meaning of home as seen in the world . In this case a simple slide combines three images to allow you to see them all, without omitting any of the best creations conceived and designed for the occasion.

It should be remembered as the best in the history of Google doodles are stored in a special gallery and that there is a chance to own the preferred doodle buying T-shirts, mugs and other items of merchandise using the appropriate Doodle Store online made available to anyone who intends remember their favorite character or event with an object to keep.

Anyone wishing instead to dip into their creativity and hope to see published its own doodle, should not do anything but write to Google:

The doodle team is always keen to seek views from users: Requests can be sent via email to [email protected] with ideas for the next Google doodle. The team receives hundreds of inquiries every day, so unfortunately we can not respond at all. But please be assured that we read all emails 🙂