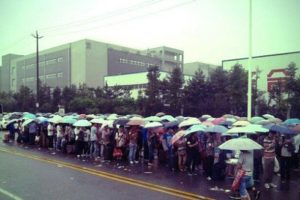 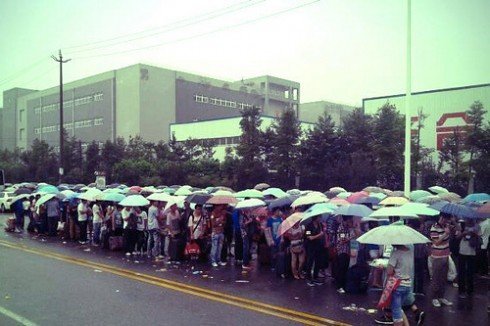 Heavy rains that come in the Chinese city of Chengdu is not a hindrance to thousands of people who want to apply for seasonal work in Foxconn.

As the resource MIC Gadget, this plant will be made new 7.85-inch Tablet Apple iPad Mini. Applicants, in order to participate in the selection, you must pay a registration fee of 24 dollars. One of the mandatory requirements for admission to employment is a good sight.

It is expected that the iPad Mini goes on sale in October and will be serious competition for low-cost 7-inch tablet from Amazon and Google, including the price.

A set of seasonal workers is at the other major Chinese factory Foxconn – in the city of Zhengzhou. MIC Gadget claims that it has already begun production of the first test batches of the new Apple iPhone 5.

Recall, according to recent reports, iPhone 5 may be submitted is August 7 , and its sales will begin in late August or early September.