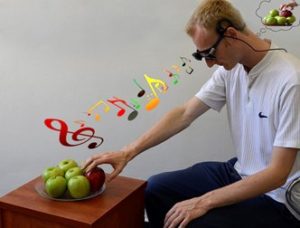 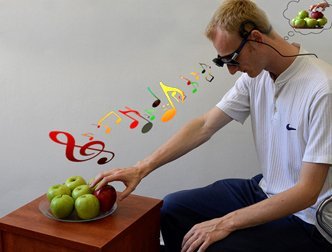 A group of scientists from the Hebrew University of Jerusalem has developed a device called EyeMusic, designed for people who were unable to see the world with my own eyes. The authors of this creation is called sensory substitution device it and add that with the help of his blind people can quickly and accurately navigate in space and can easily perform various operations.

The device works on the principle EyeMusic replacement audio visual information, that is, transforms what he sees sighted people in the music. In my work unit uses a variety of musical tones and ranges to create a specific combination of melodies and sounds, different for each of the objects of the environment. For example, using EyeMusic people can distinguish an apple from a banana or an orange from a lemon, barely touching the fruit.

The device itself looks like regular sunglasses. They mounted a special camera that “sees” everything that is next to the man, and passes this information on special sensors. They process the data and convert them into sounds. The camera continuously scans all he sees.

A key feature of the device EyeMusic is that it allows us to distinguish not only objects, but even the colors – every shade assigned a tone. Portal Gizmag.com also reports that the built-in camera can determine the distance to certain objects and objects of the environment. Generated sounds are fed to the headphones.

The device has passed EyeMusic series of tests in the study of Jerusalem scientists. In the experiments, participated a group of 18 people who can not see. Each of the experimental glasses he wore on his EyeMusic, checking them in, and in each case, the device showed itself at its best.