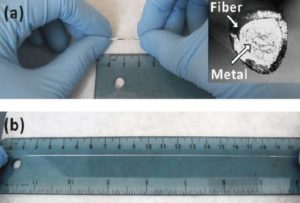 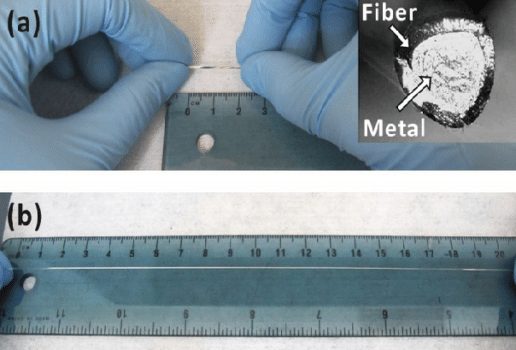 Researchers at the University of North Carolina have created new elastic cables that can be expanded up to eight times then its original length without stop working for it, as reported. Now  flexible electronics can be a realty thanks to new format that we had not seen so far.

How they make it possible?

To make this possible,they have developed an elastic polymer composite cable filling a liquid metal alloy, indium gallium (used in photosensors, for example), which assist the conduction of electricity notwithstanding that the resultant wire deflects. Equally valid is for sound transmission in the case of headphones, which a priorinot lose quality. Traditionally, greater amounts of metal increasing the conductivity of the composite, but it was virtually impossible elasticity. This new approach isolates the materials, treated separately, thus ensuring maximum conductivity without compromising the elasticity sought. According to its creators, these novel compounds are much more flexible and more elastic conductive material , and somewhat more conductive than the elastic tubes that are presently known.

This development will have clear consequences, and that the application of these elastic cables in consumer electronics will bring very significant improvements. We can think of headphones with which no longer needed to be so attached to the sound source, or make some moves while we’re using them without fear of dragging the device or they fall to us. In that same are intended primarily to its creators, as illustrated in the video that heads this post. Or in mobile phone chargers, tablets, laptops or cameras , for example, which will expand our control, and we keep on hand despite being far from the outlet where they connect.

For the moment, only one impediment to this type of elastic cables implanted and begin to become popular among manufacturers, and is the need to prevent leakage of this metal in the event that the wire is cut .However, it is progressing well and is not put into question the ability of its creators to overcome the last obstacle before arrival to consumers. Also already launched the publication that records the development process of this material with metallic Ultrastretchable Conductivity Fibers Using a Liquid Metal Alloy Core .

If cables now have devices ranging mostly between 50 centimeters and meters in length, between handsets and chargers, they could reach four to eight meters of using this type of bungee cord around the set. In initial prototype testing and have been used only for somewhat smaller parts, for example in a portion of the headphones somewhat smaller.

Elastic Cables is a big step for the desired flexible electronics .