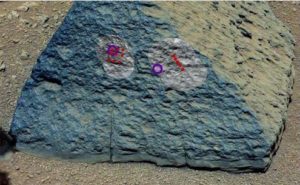 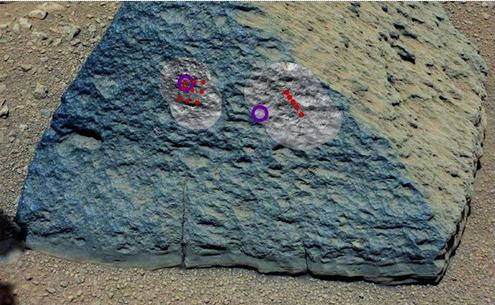 A few weeks ago we told the process had happened pyramidal rock found on Mars by Curiosity and baptized under the name of Jake Matijevic . A process that took several days and today is known more. We are facing the first stone variety never seen before on Mars . A structure with elements that can be found in a type of volcanic rock on Earth.

According to the local researchers, the structure of the material found is identical to that obtained in a highly alkaline rock type fractional, a material recognized by geologists as it is common in areas with large cracks in the Earth such as volcanoes.

This is a type of rock that had not been seen before with the previous rovers, Spirit and with or with Opportunity.

And the rock was under relatively high pressure, Matijevic passes for an igneous rock that probably formed about 5 km. below the Martian surface. An object Curiosity incidentally found while testing the instruments on its robotic arm and took samples to determine the chemical composition of various objects.

Thanks to the ChemCam , which is capable of firing laser to vaporize the stone in microscopic amounts and then analyse the remaining dust, it was learned that the rock ” Jake “contained a large amount of elements such as silicon, aluminium  sodium and potassium. And striking elements which differ from the composition of hitherto known Mars rocks.

A rock that, although unusual, since the research team notes that a single sample is isolated, and therefore can not be extrapolated to other geology of Mars.

Apple: The Voice of Siri Also Has a Face