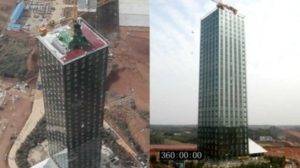 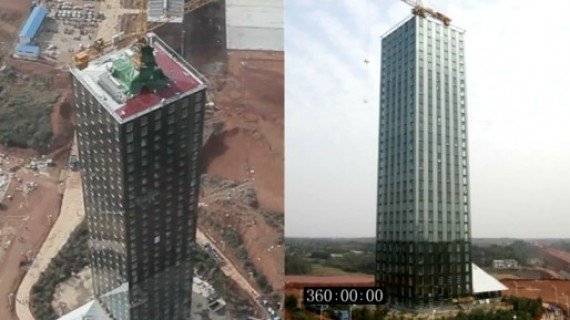 Six months ago, Chinese architects certified high-rise buildings to withstand earthquakes and is now preparing to start mass building. Feature of the new project is an unusual design efficiency and speed of construction: A 30-story building erected in just 15 days.

The features of the new building is the use of load-bearing structures of the metal, making sections of the future building of the factory and quick assembly on site. First box is going to the central part of the building with elevators and communications, it is also used to mount cranes. Then line up the outer walls, creating a living space. The exterior walls are faced with glass panels and the inside – insulation. The result is a beautiful modern house, built in record time – just 360 hours.

Due to the maximum saturation of the home communications, decorations, etc., during construction work in the open air is significantly reduced. New technology can reduce costs for a building of 3-10 times compared to conventional reinforced concrete buildings. In this case the construction of new buildings requires 6 times less than cement, and they are much more energy efficient. The fact that new buildings have successfully been tested for resistance to earthquakes, attest to their reliability & finished project.

Making sections of the house at the plant has many advantages, in addition to the work of builders in the comfort of an indoor plant. Besides being able to install the equipment in the section on request, there is a possibility in the future is easy to disassemble the building and send it to the facility.

Perhaps new technology will help to cope with growing urbanization, not only in China but also worldwide. Until now, many countries housing is not available to the general population due to the low income of most citizens and the high cost of construction. However, about 60% of the world’s population live in urban areas, which continue to become stronger. Prefabricated buildings, nothing rivals the “traditional” reinforced concrete houses, can address the housing shortage in urban areas.