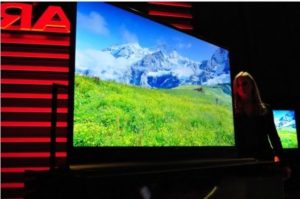 The nimble IGZO TFTs come so far, especially in high-resolution smartphone used, and so far only seems to dominate the production of Sharp IGZO. However, work, other major LCD manufacturers such as Samsung and LG in it. For high-resolution displays to IGZO technology is so important because the smaller transistors cover less pixel area, increased light transmission and reduce the power requirements of the display.

Besides the 32-inch Sharp also has a smartphone with 4.9-inch LCD and IGZO TFTs and a 7-inch tablet with WXGA resolution in the program -. So far only in Japan in trade

Among the already presented at the IFA 4K TVs with ultra-HD resolution to the 60-inch (1.52 m diagonal) ICC Purios summer come on the market, the big Quattron models with 4K pixels in the second half . The content will obviously be extrapolated Sharp, 4K movies are still scarce.

The 4K displays are produced obviously with Corning Glass – Display of American glass specialist, announced at a press conference to try to continue the partnership with Sharp to continue. Such statements are Sharp, given its disastrous financial situation currently very important. What Sharp has resulted in the lopsided margin, can be reconstructed in the face of really good techniques of the Japanese hard.Especially since Sharp has another important addition to Corning industrial partners,including Apple .

At CES Sharp introduces its new TV models with full HD resolution for 2013: Essentially 60 -, 70 – 80 – and 90-inch TVs with brushed aluminum frame, Smart TV features such as split screen for TV and web applications, Second Screen for Android and iOS and new remote control apps. Ten models lies the Quattron technology and thus the fourth, yellow color in the sub-pixels.

An interesting announcement made for the Sharp Quattron next generation: they shall rule the sub-pixel rendering, so each pixel can control split. The Moth-Eye technology which is currently used among others in the flagship TV from Philips is to get an update. It provides very little reflections on the TV screen, is currently very expensive. The two technology updates will no longer be offered this year, but only in 2014.