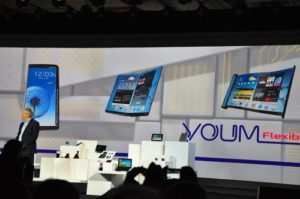 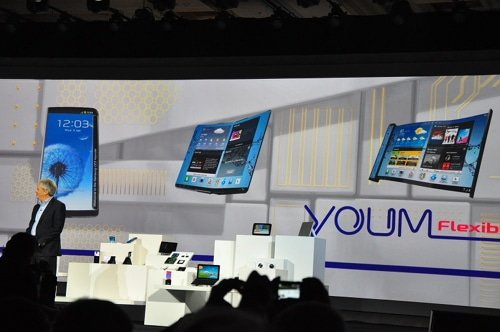 During the second keynote at CES 2013 , Samsung unveiled to the public technology Youm, ie flexible OLED display that will be reflected in the smartphone and tablet of the future . At the event, the South Korean company also showed several prototypes of mobile characterized by the presence of such innovation.

Samsung has therefore shown a glimpse of what it should offer to its customers in the coming years. Among the device put on display at CES 2013, there were one smartphone display folded that, once opened, can become tablet , a prototype of a Windows Phone device with flexible panel and a smartphone that wraps but where you can display text messages and alerts to scroll, without the user having to open so the entire screen. Samsung had presented in 2011, always at the Consumer Electronics Show, the concept of flexible panels, but anyway this time the experiment went further. 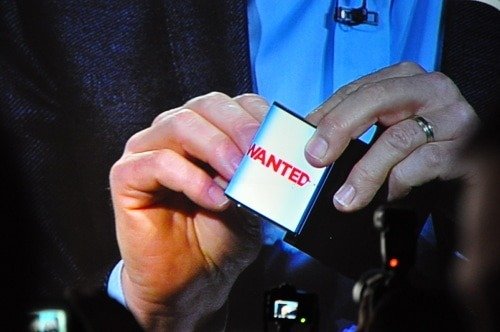 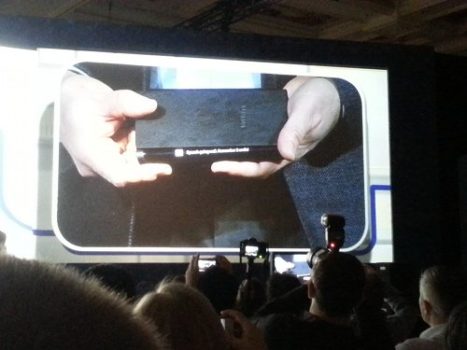 You can see notifications running on the edge of your screen with the new flexible OLED display.

The South Korean manufacturer said that youm is based on OLED technology and is an ideal technology not only to enable the improvement of color contrasts , but also to expand the form factor of the devices. Partners will then realize, in the future, devices with bendable displays, roll up and roll. In fact, in the form of a smartphone portfolio that, once opened, it becomes a tablet would be a real revolution . About partner, a particular time of the keynote was reserved for Microsoft , who took the stage with Eric Rudder, which is the official head of the technical division of the company. Rudder showed a prototype of a Windows Phone with the supplied display Youm, thus emphasizing how Redmond is in the front row for the unique technology of Samsung.

Unfortunately there is no information was circulated around the time when Samsung Youm hit the market, so we have to wait to learn more about it. There is, however, who speaks of a possible integration into the Samsung Galaxy Samsung Galaxy S5 or S6 , although it is more likely that the Korean company decides to introduce a whole new series exclusively characterized by the presence of such flexible OLED displays.