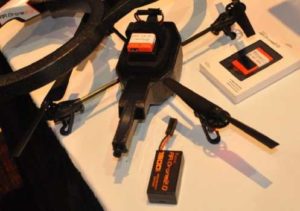 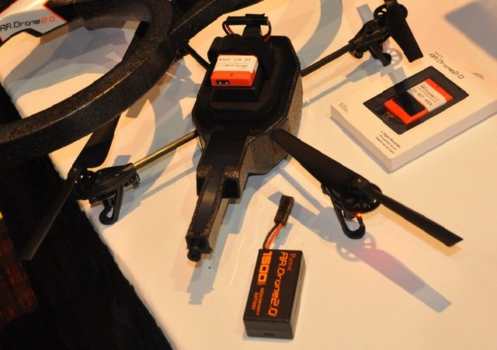 U.S. companies Parrot displays at the CES 2013 (Consumer Electronics Show)  in Las Vegas, a hardware add-on for its quadrocopter AR.Drone 2.0 . About the matchbox-sized box which is connected via USB to the UAV contains a GPS module, can record to 4 GB of flash memory built the flight data or video camera. In the course of this year, the add-on as well as improved control software on the market. A price has not yet been determined.

With the help of third party software cQGroundControl it should be possible to feed the AR.Drone 2.0 to advance with coordinates that the quadrocopter takes off by itself. From the “flight recorder” recorded flight data can be downloaded to the computer and understand in a 3D animation. Parrot also shows a new 1500 mAh battery for the aircraft through which the flight time will be extended by 6 minutes to 18 minutes.