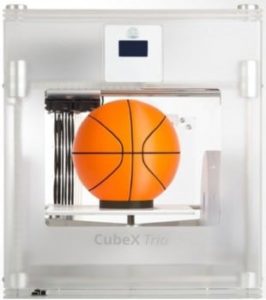 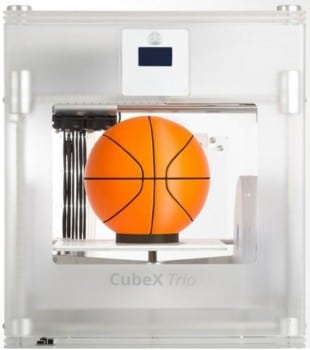 Prints up to three-dimensional objects in three colors and the size of a basketball: the CubeX 3D Systems has unveiled at CES. Picture: cubify.com

The new 3D printer CubeX of 3D Systems sees its predecessor, the manufacturer of the Euromold in November devoted his own shop on the outskirts of the fair. Anyone who knows a bit of the scene in which the “new” 3D printer presented at the CES in Las Vegas  as striking contrast to the already somewhat aged model 3D touch from the manufacturer Bits from Bytes. This company was taken over some time ago by 3D Systems Group and is has been placed no more new machines on the market.

Much like the older 3D Touch is the new CubeX with either one, two or three extruders have to.Through this pushes the engine heated and thus deformable plastic like a hot glue gun and builds layers onto the model. The size of the design space and thus the maximum dimensions for printing objects are to 3D Systems for CubeX with 27.5 cm × 26.5 cm × 24 cm. The 3D printer to print with either a horizontal thickness of 1.2, 2.5 or 5 millimeters, which hinbekam also the 3D Touch already.

In two points, the CubeX differs from its predecessor obvious: First, it should not be unwound plastic wire material (ABS or PLA) of open roles, but from closed cassettes, as the first cube . Secondly, 3D Systems advertises that the CubeX “parts of the size of a basketball up to two times faster and in higher resolution” to print than other machines in its class. Apparently, new technology is in the old chassis.

The 3D printer CubeX can already have the page Cubify.com preorder. There, the most basic version costs 2157 U.S. dollars, the Duo variant with the double header in 2811 U.S. dollars and the flagship with three print heads 3465 U.S. dollars. These prices are to enjoy with caution as there are applicable delivery to Europe is usually a few hundred euros for shipping, customs and tax