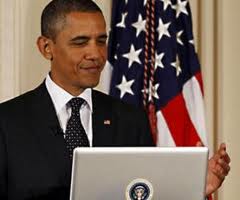 The election campaign is getting on the web and in fact a few hours Barack Obama arrives on Tumblr with a space provided.

It was the first president in U.S. history to have collected more money with the mail with the election dinners, the first occupant of the White House to open a Facebook page and the first to tweet. Nothing to wonder, then, the new step of Barack Obama ‘s campaign for the 2012 elections: a page Tumblr .

The President of the United States, engaged in a difficult race for re-election, did not want to miss one of the most popular place on a platform of the moment: at barackobama.tumblr.com page opens Obama for America, which opened yesterday with a salute of directors (“Tumblr Hi, nice to meet you”) and today stands out the first post , titled “We can not wait” dedicated to the complicated approval of the economic rules in Congress, led by a Republican majority.

This page complies with all the trappings of Obama’s communications era. An example: a few hours ago it was the picture of a staff member intent to pack hundreds of phones destined for the offices in Ohio: clicking on the image will direct you to volunteer for Obama page on his official website barackobama.com . From online content recruitment, in a click.

Integration with other tools, particularly social networks, is total: Twitter , Facebook ,YouTube . The official website collects the flow from the various instruments and at the same time is the reference for the dissemination of the contents of the campaign, starting, of course, the possibility of donations.

On Tumblr Obama can sign a message or send a donation, and although the official site has more content, Tumblr page is just for attracting that segment of potential voters, the young generation, who are not interested in politics but that tends to still sail daily on the Internet. The secret of his first election, in short, that the president hopes to be able to repeat.