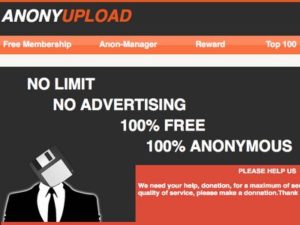 Anonyupload , self-Candidat as a possible heir to Megaupload but soon private support Anonymous, reaches its first milestone: 20 000 users have placed their trust in the service and are said to be ready to start its upload / download from the project servers . Which, however, is currently difficult to find out more.

All that you can know about what the team is Anonyupload public on the official website of the project. It is, therefore, know first that they are 20 000 active accounts and records have been temporarily suspended because FTP is not technically possible to accommodate other users at the time . At the same time the project opens, however, for a possible extension, “you can make a donation. We are a project office. Your files are in our private area. “

Forms for donations, in fact, are back online after the first hour all had been removed since the first money received was sufficient to set up the first phase of the experiment. Visa, Mastercard and other tools are just a click away with four stated goals:

The team also publishes Anonyupload special thanks to Kim Dotcom , one who has created and managed the project Megaupload first incursion that led to the arrest and seizure of the servers directly responsible for:

DotCom Thanks for your past years of service.
We hope that you will be issued as soon as possible.
Next time try not to accumulate such an amount of money, and should get better. 😉

Anonyupload distances by Anonymous, preaches decentralization and locate their servers in Russia to escape U.S. jurisdiction. All that is known is what is published, leaving it poised judgments concerning the quality of the project or the possible fraudulent profile initiative. Several clues seem to suggest the idea of letting a real initiative, whose outcome is still yet to be demonstrated. The author of the project (avowedly independent, but with the support of a team) makes no promises for now, but only wishes:

Anonyupload.com was written by a single person, but with the help of other […]. We do not want to make millions of dollars with this activity, but we do not know if we can only with donations to stay online and ensure service reliability.

Megaupload has a Successor: Anonyupload