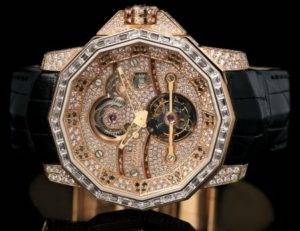 It is Watch Fully Set With Diamonds By Corum Admiral.Great Watch.It is a demanded for history loving people.

People often miss the point of watches like this when they comment, “it’s not worth that price!” No, it’s probably not worth the retail cost (which is certainly $100,000 plus), but you aren’t paying only for the value of the materials, you are paying for image and exclusivity. The Corum Admiral’s Cup Tourbillon 48 is a status symbol on your wrist, and the cost of ownership will keep the watch out of most people’s hands. 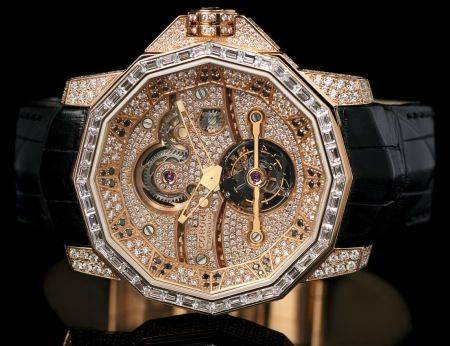 Corum’s Admiral’s Cup line has recently evolved into a show-off watch. Progressively getting larger, the watch that began as a celebration of a yacht race now seeks to be a timepiece ‘measure of a man.’ This 48mm wide version covered with diamonds has shed the characteristic flag hour indexes and replaced them with black diamonds (48 black diamonds make up the hour markers). The rest of the 18k red gold case is covered with 1,389 diamonds of various cuts for a total of 10.5 carats. The watch is no longer much of a submersible with a water resistance of only 30 meters. Overall look of the Admiral’s Cup Tourbillon is extremely decadent.

Powering the watch is a manually wound Corum caliber 372 with a tourbillon complication. Interestingly enough, the power reserve is about 90 hours, which leads me to believe that the movement has at least two barrels. While tough to notice, the tourbillon cage is shaped like the iconic Admiral’s Cup key logo that is typically present on the end of the seconds hand on the non-diamond version of the watch. The dial isn’t the easiest to read, but no one who acquires a Corum Admiral’s Cup Tourbillon 48 is doing so for practical time-keeping purposes.