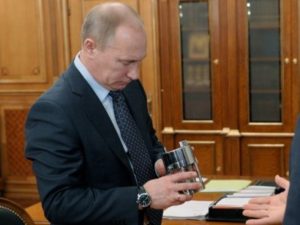 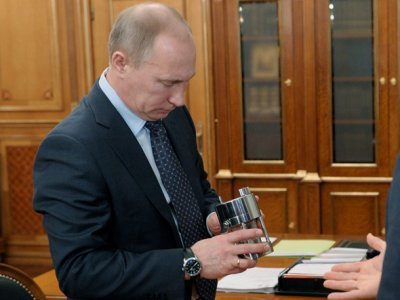 The Minister of the nature of Russia Yuri Trutnev gave Prime Minister of Russia Vladimir Putin sealed flask with water from the subglacial lake “East”, which was hidden under the ice in Antarctica millions of years.

According to the label on the flask with water, it got 5 December 2011 from a depth of 3769.3 meters. Getting a present, Putin said Trutnev, he drank the water. After receiving a negative response, Prime said: “And it would be interesting: the dinosaurs drank and drones.”

This water is a lake ice, which scientists have got from an ice core from the bottom of the borehole. But water from the lake itself, which was in the drill,brought to Moscow in mid-May.

At a meeting with Prime Minister Trutnev said difficult conditions in which the Russian scientists to work in Antarctica, where winter temperatures drop to minus 80 degrees Celsius mark. However, he promised that work will continue.

In turn, Putin noted the achievements of polar and promised to think about their promotion.

“This is a great event. We need to think how to celebrate these people “- prime minister quoted by “Interfax”.

Earlier this week it was reported that Russian scientists were the first in the world reached the waters of Lake Vostok, which have been preserved under the ice of Antarctica for millions of years. February 5 were drilled last few meters of ice (the depth was 3768 meters), and researchers have reached the surface of the subglacial lake.

Drilling with the Russian Antarctic station “Vostok”, which is located under the lake, continued intermittently since 1990. Scientists hope to detect microorganisms in the waters of the East, which had been isolated for thousands of years and could evolve in unusual forms of life.

Extremophiles, if they are found, held in harsh conditions Millennium absence of light, constant cold, high pressure and high oxygen concentration, as well as small amounts of nutrients.

The Academy of Sciences of penetration into the subglacial Lake Vostok is in scale compared with the landing on Mars. The lake can be discovered being unknown to science and not having “relatives” in other parts of the earth. A few million years the lake has been isolated from the earth’s atmosphere, and no one knows what and who has been brought into this pond. Even if they show up only bacteria, their study could be a breakthrough in science.

The study of lake water will not begin until December 2012, because in February in the Antarctic autumn comes, and all work on the winter minimized. Zakonserviruyut well before the next Antarctic summer.

Russia and South Korea Sign Agreement to Clone the Mammoth

The Secret of Vintage Perfume Fragrances

Manolo Blahnik shoes – A Dream Even for Celebrities