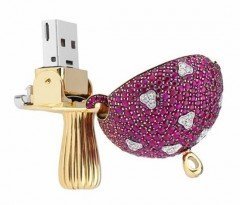 Some flash drives are expensive, because their volume is 1 TB, and read-write speed is amazing, but the world`s most expensive flash drive is in the form of a mushroom and covered in diamonds and other precious stones. The parade of luxury hi-tech devices  is continuing. 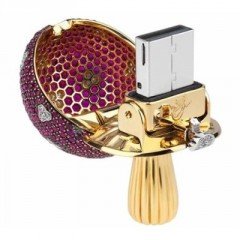 The famous Swiss jewelery company La Maison Shawish has released USB Flash Drive in the picture above – the budget version of “fungus”, covered with pink sapphires and white diamonds. It costs “only” 16,500 dollars. its line of luxury USB Flash Drive Magic Mushroom, which can only store up to 32 GB of data, but it will cost consumers nearly 37,000 dollars depending on color. 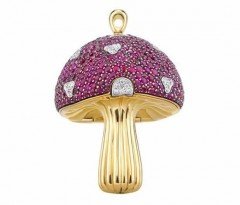 Price of red variant, where the stones are replaced with pink ruby, a little higher – 24 400 dollars. But if you and that’s not enough, then there is a modification of the green stick, covered with emeralds. It is mind-blowing 36,900 dollars.

According to the jeweler who created these elite flash drives, he was inspired by the fairy tale “Alice in Wonderland” and sees a lot of sense to combine the images of classic literary works and modern technology.