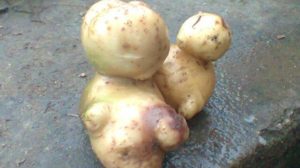 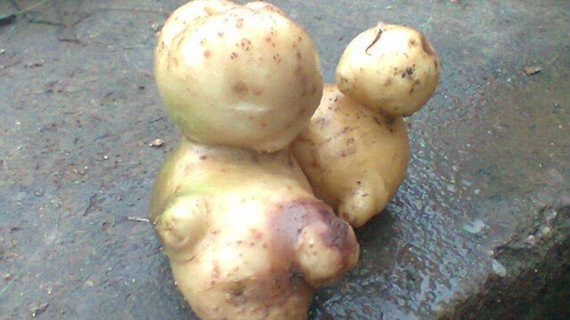 Potato shaped exactly like the  mother and daughter “watching” each other

It seems that Darwin was Right because Potatoes Trying to Evolve into Human Being!

Nguyen Van Chin (30 years) in the neighborhood of 7, Nghia Binh, Tan Ky district, Nghe A province were surprised to discover that a potato has an odd shape, “the mother and daughter looked at each other”.

“Old potatoes are harvested in the family garden. On my last but by a few quintals of potato tubers only just saw this strange shape, so I keep to show to everyone.Potato was unexpected to see so many people. “

According to Chin yesterday (7-2) had 500 thousand people paid him to buy potatoes, but he was not selling.

These days about potato shaped strangely has attracted hundreds of visitors come to see.Through consultation with local agricultural experts, this phenomenon is rare but there is nothing mysterious.