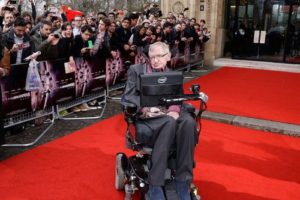 The auction house Christie’s has recently announced the auction of a batch of 22 objects belonging to the eminent physicist Stephen Hawking. Among them are several medals, several papers , several copies of his doctoral thesis, as well as one of his wheelchairs. These, more than a fetish object, have become an icon of technological improvement and advancement, as we could see in the last one that led the physicist in his day to day.

In total, 22 objects belonging to the cosmologist will be auctioned. Among them is the wheelchair that Hawking used between the 80s and 90s and a copy of his doctoral thesis, “Properties of an Expanding Universe”, from 1965. In addition, various scientific articles will be auctioned, a copy of “Brief history of time” “signed with his fingerprint, a copy of the script of the chapter of The Simpsons where the physicist appeared, a hunter, articles and documents of several scientists (among them, Darwin, Isaac Newton or Einstein) and several of his medals and awards .

What is special about the lot?

Each of the objects sold are, in themselves, a piece of incalculable history. For example, the book, whose blurred fingerprint refers to its uncomfortable physical condition, is one of the copies of one of the few scientific books inscribed in the Guinness Book of Records in 1998. After publication, it quickly became one bestseller . In May of 1995 he entered the list of “The Sunday Times” among the best sellers for 237 weeks, and broke the record of 184 weeks.

The copy of the script is a true jewel of pop culture , and its articles “Spectrum of Wormholes” or “Fundamental Breakdown of Physics in Gravitational Collapse”, mark a before and after in the history of science, since they are cornerstones in the description and understanding of black holes.

What’s wrong with this chair of Stephen Hawking?

It is not the best known of all of Hawking’s, which turned this element into a symbol of overcoming, rather than a sign of his illness. However, it is the chair that we have seen most, because this is precisely what appears in the chapter of The Simpsons (without the blades, the robotic arm or the automatic toothbrush, I am afraid). This chair was used by the physicist between the 80s and 90s, and belongs to the models in which the physicist could still use his hands to control the chair.

Later, Hawking had to use other more ingenious models that worked by voice commands. Stephen Hawking always had two motorized chairs, in his day to day, to avoid problems. The last model change, which we remember, was made in 2014.

How much is the whole lot worth?

Where will the money go?

Many of the objects have been donated by foundations and institutions, while the great majority have been given by the family. His daughter, Lucy Hawking, said that

the admirers of her work have the opportunity to acquire a memory of the extraordinary life [of her father] in the form of a small selection of evocative and fascinating articles.

But a large part will go to foundations and entities. For example, everything collected by the wheelchair will be destined for the “Stephen Hawking Foundation” and the Association “Motor Neurone Disease“, which ensure knowledge and research on amyotrophic lateral sclerosis such as that suffered by the scientist.