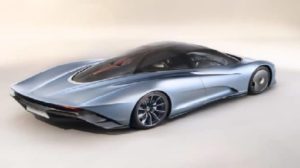 Car manufacturers impose no limit when working on their hybrid supercar. Here is a breathtaking McLaren Speedtail.

McLaren is well known for its high performance vehicles. The brand today unveils a new supercar, a car of all superlatives. Buyers can spend the $ 2.25 million to have a car in their hands that can reach 400 km / h. This hybrid supercar is extremely aerodynamic combining modern and classic technologies that are the signature of McLaren .

The McLaren Speedtail therefore has a top speed of 400 km / h and according to reports, it could swallow the 0 to 300 km / h in only 12.8 s. If these numbers are true, this car would be 4 seconds faster than the McLaren P1.

And we also find some features of the famous McLaren F1. The pilot is centrally located with a passenger seat on each side. The cabin also offers its share of touch screens, to display essential information and controls. Note that the McLaren Speedtail is not equipped with conventional mirrors. Screens on the left and right side of the dashboard retransmit what two retractable cameras on the sides of the car see.

McLaren made this decision because such mirrors are smaller than the traditional ones, which creates less wind resistance. Everything in this car has been made for aerodynamics, so that the Speedtail can split the wind as easily as possible.

$ 2.25 million and personalization pushed to the extreme

As with our first ‘Hyper-GT’, the Speedtail is the ultimate McLaren, a fusion of art and science that combines breathtaking top speed with a central driving position and a truly innovative approach to personalization”, stated McLaren Automotive CEO Mike Flewitt.

The Speedtail will be manufactured in only 106 copies and all have already been reserved. Not bad for a car at 2.25 million dollars … not counting the possible customization options chosen by the owners! McLaren plans to deliver its supercar in 2020.

Fastest Supercar will Accelerate to 100 km / h in Two Seconds

Cars On Which You Can Ride Only In Dreams.