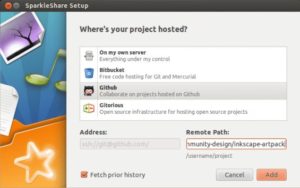 The SparkleShare developers have released version 1.0 of its synchronization solution published . The software is available for Linux, Mac OS X and Windows.It offers the functionality which is similar to Dropbox but uses Git as a backend to store data for synchronized on the server. The version control system can be run on a dedicated server or on a Git hosting like GitHub, Gitorious or Bitbucket.

SparkleShare the client specifies the start of a folder whose contents are synchronized with all other SparkleShare installations of the user. Thanks Git, it is possible to access previous versions of files. And multiple users work with a common repository. The data transfer between client and host lattice is encrypted. The data can optionally save encrypted and the key is stored locally.

SparkleShare stores the data in the version control system Git. The software works best with text files and may not be suitable for large binaries. The clients for Linux, Mac OS X and Windows are available for free under the GPLv3. Some developers outside the project also ask clients for Android and iOS ready, however, they need to install additional software on the server.